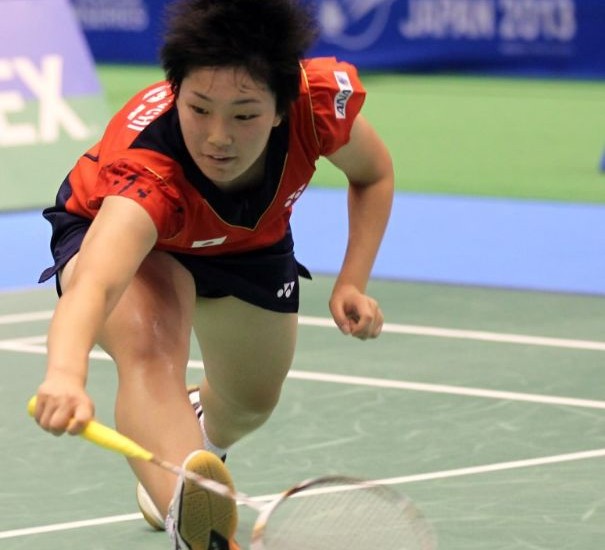 Japan’s young crop of Women’s Singles players gave fans at the Yonex Open Japan 2013 plenty to cheer today with a succession of victories.

The Japanese barely put a foot wrong in singles. By end of day’s play, five home players had clinched quarter-final spots in Women’s Singles and two in Men’s Singles. The biggest upset was that of BWF World Championships bronze medallist PV Sindhu (India, 8), who was knocked out by qualifier Akane Yamaguchi (BWF home page). The 21-6 21-17 victory over the in-form Indian took just 32 minutes. Yamaguchi had survived two qualifying rounds and a 58-minute first-round tussle with Japan’s Ayumi Mine.

Just as significant was Shizuka Uchida’s upset of recent Adidas China Masters runner-up Porntip Buranaprasertsuk (Thailand). The Thai began well, holding off a late challenge from Uchida to pocket the first game but her Japanese rival set the pace in the next two games, taking early leads and preventing Buranaprasertsuk the opportunity to close in on her. The 19-21 21-15 21-14 victory took just over an hour. The other Japanese to enter the quarter-finals were Yui Hashimoto, Sayaka Takahashi and Minatsu Mitani (7).

A couple of their Men’s Singles compatriots progressed into the quarter-finals. Japanese qualifier Jun Takemura  was a straight-games victor over eighth seed Hu Yun (Hong Kong), 21-18 21-17, while his senior, Kenichi Tago (7), took 70 minutes to battle past Marc Zwiebler of Germany, 21-16 19-21 21-14.

Like Japan, India too had a successful day in Men’s Singles. Haseena Sunilkumar (HS) Prannoy (centre below) notched his career’s biggest win by shocking Jan O Jorgensen (Denmark). Jorgensen recovered from a first-game loss to take the match to a decider, but Prannoy kept a narrow lead all through the third game to triumph 21-14 13-21 21-17. He was joined in the quarter-finals by two other Indians. Kidambi Srikanth entered his first Superseries quarter-finals by outplaying giant-killer Kazuteru Kozai of Japan. Kozai, who had beaten second seed Chen Long of China in the first round, could not find the answers to Srikanth’s speed and aggressive play, as he went down 21-12 21-16 in 32 minutes. Another Indian, Ajay Jayaram, survived a long three-game match against Yuichi Ikeda (Japan), 21-13 11-21 21-18, to join Srikanth and Prannoy in the quarter-finals. Anand Pawar was the only Indian Men’s Singles player to lose on the day; Pawar was given no chance by top seed and defending champion Lee Chong Wei (Malaysia), who breezed past him, 21-12 21-16. Indonesians notched their 12th straight-games win in a row, beating Yuya Komatsuzaki/Hiroki Takeuchi (Japan) 21-19 21-19 to enter the quarter-finals. Their closest challengers, Mathias Boe/Carsten Mogensen (Denmark, 2) and Liu Xiaolong/Qiu Zihan (China, 4) also made it to the quarter-finals without dropping a game. Local hopes Hiroyuki Endo/Kenichi Hayakawa (3) were however knocked out, 21-14 21-12, by China’s Chai Biao/Hong Wei.

* In Women’s Doubles, top seeds Ma Jin and Tang Jinhua of China ran into some trouble against Yuriko Miki/Koharu Yonemoto, but emerged victorious in three games, 21-10 19-21 21-14. Ma and Tang will face each other in the Mixed Doubles quarter-finals as Ma Jin with Xu Chen (right) dismissed Japan’s Hashiru Shimono/Wakana Nagahara 21-13 21-10, while Chai Biao/Tang Jinhua were just as authoritative against Lee Chun Hei/Chau Hoi Wah (Hong Kong), 21-12 21-19.