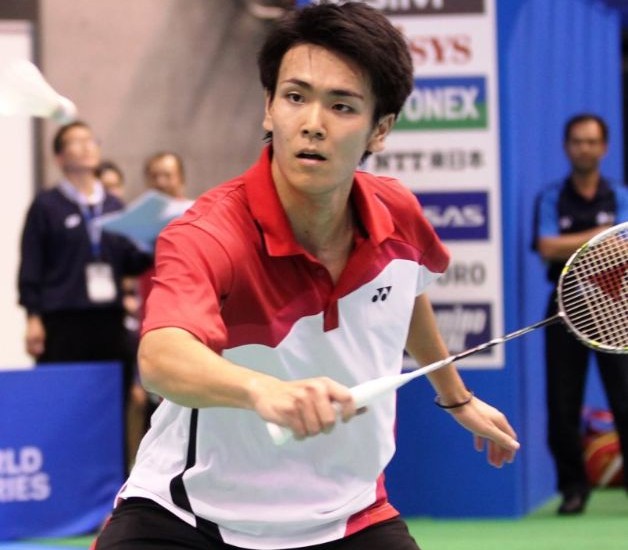 The Yonex Open Japan 2013 witnessed a massive first-round casualty today with the exit of Chen Long of China. The second seed’s demise in Men’s Singles was all the more shocking as it unfolded at the hands of little-known Japanese qualifier, Kazuteru Kozai, who rose to the occasion on the home stage.

Ranked world No. 287, this unexpected vanquisher has played only one international event since April 2012 – the Osaka International Challenge – which he won. Kozai (BWF home page) was locked in a tight first game with Chen and clinched it after saving a game point. The second game was easier and he came through 24-22 21-16.

There were other significant results in the Men’s Singles draw. China’s Wang Zhengming, who was victorious in the Adidas China Masters Meanwhile, Indian players struck some big blows; the wrecker-in-chief being Kidambi Srikanth (right), who has enjoyed a meteoric rise in the last year. The 20-year-old won a pulsating contest against Japan’s Sho Sasaki, semi-finalist at the Adidas China Masters last week. Srikanth, who was ranked 129 last October but has since climbed 90 places, held his nerve in a thriller. Eventually, the Indian powered ahead in the decider, not allowing his rival to overtake him as he sealed the win, 22-20 22-24 21-18 in 68 minutes.

He will be joined in the second round by teammates, HS Prannoy, Anand Pawar and Ajay Jayaram. Both Prannoy and Pawar – like Srikanth – prevailed in tense three-game affairs over higher-ranked opponents. Prannoy, a former Youth Olympics silver medallist, held off a battling Wong Wing Ki (Hong Kong) in 67 minutes. The No. 14-ranked Wong saved three match points and earned one of his own at 22-21 in the third game, but Prannoy survived and took the match: 15-21 21-17 24-22. Anand Pawar – son of former international players Uday and Sujata Pawar – made light of the difference of 25 ranking places with opponent Sony Dwi Kuncoro (Indonesia, 12), triumphing 21-17 7-21 21-18.

* Eight Japanese made it to the second round of Women’s Singles. Aya Ohori and Shizuka Uchida (both Japan) were beneficiaries of walkovers from the top two seeds Li Xuerui of China and Ratchanok Intanon of Thailand respectively. Defending champion Tai Tzu Ying (Chinese Taipei) had a comfortable opener against Canada’s Nicole Grether: 21-11 6-2 retired. * All England Men’s Doubles champions Liu Xiaolong/Qiu Zihan (China, 4) staved off a fierce challenge from Kenta Kazuno/Kazushi Yamada (Japan) to make the second round. The Chinese saved two game points in the first and overhauled a 9-14 deficit in the third before seizing the tie 23-21 19-21 21-16.