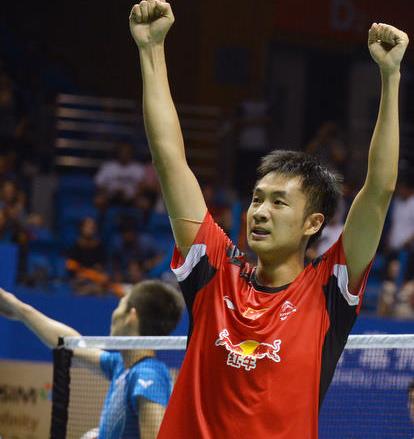 Wang Zhengming and Liu Xin savoured Superseries success for the first time as they helped China to four titles at the Adidas China Masters today. After Yu Yang/Wang Xiaoli won an all-Chinese affair in Women’s Doubles, Liu Xin and Wang Zhengming triumphed in the Women’s Singles and Men’s Singles finals respectively, before Zhang Nan/Zhao Yunlei wrapped things up for the hosts in the Mixed Doubles. The only title that eluded China’s grasp was Men’s Doubles, with Korea’s Ko Sung Hyun/Lee Yong Dae prevailing over Hiroyuki Endo/Kenichi Hayawaka of Japan.

The most engrossing match of the day was Men’s Singles, with Wang Zhengming (BWF home page) taking on Son Wan Ho. The Korean has enjoyed a stirring run of form after a ten-month break from international badminton. Son won the Chinese Taipei Open last week, got past the qualifying rounds in the China Masters, and extended his run to the final. The Korean dominated the early phase with his fluid style, working out the openings before nailing winners. Ahead 9-4 in the second game, he appeared headed to his second Superseries title, but Wang turned it around and took the match to a third game.

Fortunes swung either way as both kept up a high standard. Son had two match points but Wang pushed the pace, jumping to smash regularly. Predictably, it was another jump smash that sealed his third match point, triumphing 11-21 21-14 24-22.

Liu Xin (right; celebrating and inset), once ranked in the top five in Women’s Singles, has suffered a precipitous slide down the rankings. The China Masters was her first tournament in ten months, and she grabbed the opportunity. Her opponent, Porntip Buranaprasertsuk of Thailand, had upset top seed Li Xuerui in the semi-final and would have fancied her chances, but Liu dismantled her quickly in the first game. The drift appeared to play a part as Buranaprasertsuk looked out of sorts, managing just four points.

The Thai discovered her rhythm, and with the drift in her favour, won the second game comfortably. However, Liu shot off to a big lead in the decider, and although she struggled physically towards the end, closed it out 21-4 13-21 21-12. * Hiroyuki Endo and Kenichi Hayakawa gave top seeds Lee Yong Dae/Ko Sung Hyun (above centre) plenty to think about in the Men’s Doubles final. The Japanese recovered from 12-19 down to earn two game points, but the Koreans squeezed through, thanks in large measure to Lee’s opportunism at the net. The loss of the first game deflated the Japanese and, although they made a belated surge, Lee/Ko clinched the title with a 25-23 21-19 score. * World champions Yu Yang/Wang Xiaoli (China, 1) continued their dominance of the circuit, capturing the Women’s Doubles title over compatriots Ma Jin/Tang Jinhua (2) 21-17 21-16. They have now won 45 of the last 47 matches and won seven titles en route, including the World Championships, Badminton Asia Championships and the All England (below centre: presentation ceremony).