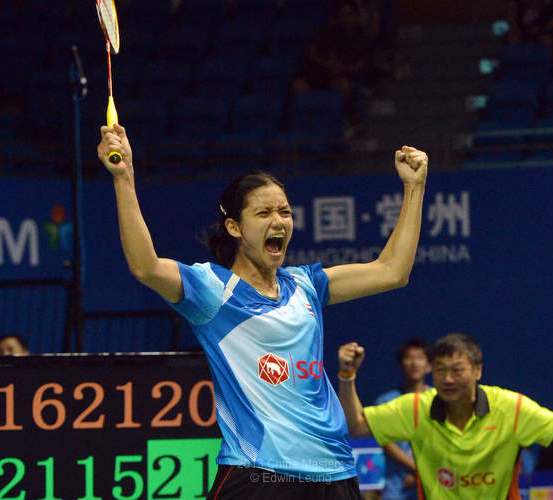 This stunning result in Women’s Singles means the No. 18 Thai is now one victory away from her second Superseries title. After beating two Chinese players in succession (Han Li and Li Xuerui), Buranaprasertsuk (BWF home page) will face another – Liu Xin – in the final. Liu comfortably got past Sayaka Takahashi (Japan), 21-17 21-15.

Despite Li’s loss, China still have a shot at four titles; already having assured themselves – not surprisingly – of the Women’s Doubles crown with an all-Chinese affair. Semi-finals day saw several thrilling matches. Apart from Buranaprasertsuk’s nail-biting success, both Men’s Singles semi-finals stretched into the third game. First it was the turn of Korean qualifier Son Wan Ho, whose comeback continued with a triumph over Japan’s experienced Sho Sasaki: 17-21 21-16 21-18. For the third time in five matches, Son (top left) lost the first game, equalised, and outplayed his opponent in the third. The Korean’s defining moment came at 14-all in the third, as he seized the next three points and did not let Sasaki sniff another opportunity.

The last match, Jan O Jorgensen (Denmark) against Wang Zhengming (China), provided a fitting finale to the day. From 12-all in the third game, neither player could gain a lead of more than one point. Wang finally converted his second match point: 21-13 16-21 23-21.

However, it was Buranaprasertsuk’s victory that was most unexpected. The Thai’s record against top-five players has previously not been noteworthy. Additionally, her form in 2013 has been average, seeing her falter in the early rounds of most of her Superseries campaigns. Against Li, though, the 21-year-old produced a memorable display, using her variety of strokeplay to offset the reach and deadly attack of the world No. 1 and Olympic Women’s Singles champion. After winning the second game, Li had the advantage at 14-11 in the third, but Buranaprasertsuk hung on tenaciously and it was a neck-and-neck battle. Li saved one match point but could not prevent her inspired opponent from converting * In Mixed Doubles, Yoo Yeon Seong/Eom Hye Won (Korea) reached their third straight final following the Singapore and Chinese Taipei Opens. The Koreans were locked in close battle with Riky Widianto/Puspita Richi Dili (Indonesia, 6) but advanced to the final, 23-21 21-17. The Indonesians had game point at 21-20 in the first, but from there the Koreans surged ahead to win the match. Yoo/Eom will have to beat Olympic champions, Zhang Nan/Zhao Yunlei (China), if they hope to avoid the runners-up tag for the third tournament in succession.