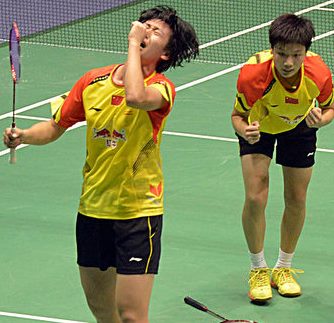 Continuing their dream run in Changzhou, the newcomers (BWF home page) dispatched seasoned duo and No. 3 seeds Misaki Matsutomo/Ayaka Takahashi, 21-17 22-20. In the first round, the newcomers had shredded hopes of eighth seeds Reika Kakiiwa/Miyuki Maeda, also of Japan.

The hosts assured themselves of three semi-final spots in Women’s Doubles, with Ma Jin/ Tang Jinhua surviving a close tussle against Korea’s Jung Kyung Eun/Kim Ha Na and the smooth machinery of top-seeded Yu Yang/Wang Xiaoli cruising on to the final four.

In Women’s Singles, Porntip Buranaprasertsuk of Thailand entered her first Superseries semi-final after almost a year’s wait. The world No. 18 Thai, whose last semi-final was at the Japan Open in September 2012, outplayed China’s Han Li. The former top-ten Buranaprasertsuk has had an indifferent run of form over the last year, but she was impressive against Han Li, who had upset fourth seed Sung Ji Hyun (Korea) in the previous round. The match was evenly poised in the first game, but the Thai was sharp when it mattered, using an intelligent mix of strokes to counter Han. The second game see-sawed, with the Chinese gaining a 10-4 lead, but was unable to retain it as Buranaprasertsuk held steady under pressure and closed it out at 21-19 21-17. Her reward will be a semi-final against top seed Li Xuerui, also of China.

In another quarter-final, Japanese youngster Sayaka Takahashi edged past Yao Xue of China 21-16 22-20 after fighting back from deficits of 8-16 and 15-19 in the second game. The Men’s Singles had players from four countries making the semi-finals. Korean qualifier Son Wan Ho’s dramatic run continued as he eased past fellow-qualifier Zhou Wenlong (China) 21-14 21-11. He takes on Sho Sasaki, who won an all-Japanese battle against Kenichi Tago 21-18 21-8. Meanwhile, sixth-seeded Dane Jan O Jorgensen (centre above) was pushed to three games by World Junior Champion Kento Momota (Japan), with the Dane winning: 21-17 17-21 21-6. Seventh seed Wang Zhengming (China) was tested by another young Japanese prospect, Kazumasa Sakai. The Japanese made a stirring comeback from 10-18 down in the second game to take a 19-18 lead, but Wang gathered his wits in time to close it out 21-14 21-19.

* All England champions Liu Xiaolong/Qiu Zihan moved one step further towards capturing their home Superseries title when they scored a comfortable 21-16 21-17 win over compatriots Huang Kaixiang/Zheng Si Wei in the Men’s Doubles quarter-finals. Fellow-Chinese Chai Biao, who won the title last year partnering Zhang Nan, also moved into the semi-finals in the company of Hong Wei.