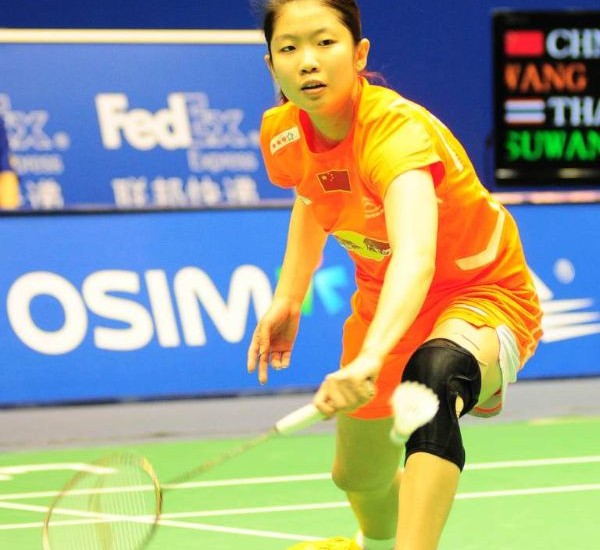 Former Women’s Singles world No. 2 Wang Xin took a major step towards resurrecting her career when she made the main draw of the Adidas China Masters today.

The Chinese left-hander, last seen hobbling off in tears from the London Olympics bronze-medal match, which she conceded to Saina Nehwal (India) after sustaining a leg injury, returned to competition on home ground. Interestingly, in her first qualifying fixture, she beat another player who also retired injured during the London Olympics: Sayaka Sato (Japan). Wang won a tight encounter 21-18 20-22 21-14 and then eased past her second-round opponent Sarita Suwannakitborihan (Thailand; at right) 21-14 21-12.

Wang is now pitted against compatriot Xuan Deng in the first round.

The two other Women’s Singles qualifiers were Chinese: Fan Mengyan and Yaying Shen. The home team has 13 representatives in the 32-player draw in Women’s Singles. Top seed and home favourite Li Xuerui will be challenged by Belaetrix Manuputi (Indonesia). Second seed Ratchanok Intanon (Thailand) has withdrawn and has been replaced by qualifier Suo Di in the bottom half of the draw. last season. However, the Korean was not seen on the international circuit after the Olympics, and made his comeback at the Thailand Open in June 2013 with a quarter-final performance. Son lost in the first round of the BWF World Championships in August. The Adidas China Masters is his first Superseries tournament in more than a year. He will play eighth seed Takuma Ueda (Japan) in the first round.

The other three Men’s Singles qualifiers were all from China: Tang Jincheng, Gao Tianyu and Zhou Wenlong. Jincheng will be involved in an all-China contest against Gao Huan, whie Tianyu will battle fifth seed Kenichi Tago (Japan) and Wenlong takes on Indonesia’s Dionysius Hayom Rumbaka.

* Women’s Doubles saw all the Chinese pairs qualify without hitting a shuttle. Qualifiers Liu Linlin/Wang Qindanqing will be challenged by Indonesians, Greysia Polii/Nitya Krishinda Maheswari, while two other qualifiers – Jiang Binbin/Tang Pingyang and Fu Xue/Zheng Xuhui – face each other for a place in the second round.

* In the Mixed Doubles, 2008 Olympic champion Lee Yong Dae’s (Korea) new partnership with Shin Seung Chan did not take off, and their Chinese opponents Cheng Luo/Jia Xiao advanced without stepping on court. Another qualifying pair, Junjie Guo/Luo Jiaxin have an opportunity to spring a surprise when they meet Chinese compatriots and top seeds, Xu Chen/Ma Jin, in the first round.