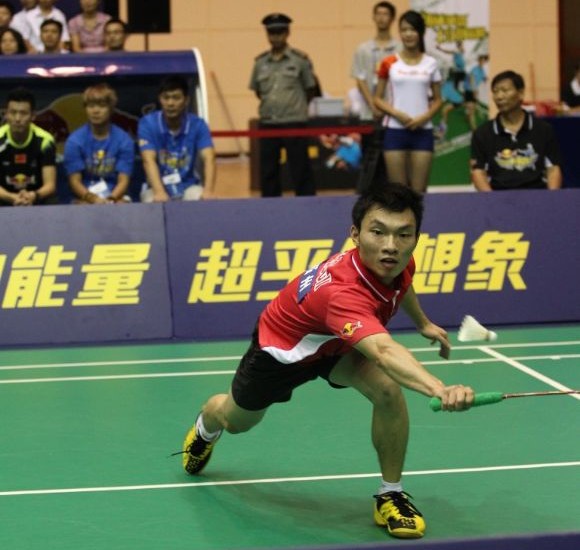 Thrilled by public response to the fourth annual countrywide battle for amateur badminton supremacy – which ended in victory for Suzhou Huang Jia Zhu Zhai Club – RedBull China is eager to strengthen its partnership with the Badminton World Federation (BWF) by raising badminton’s profile through its community-based project and strategically linking it to elite events.

Held to coincide with the Wang Lao Ji BWF World Championships in Guangzhou, China, earlier this month, the “RedBull Super Final” brought together four amateur finalists, the surviving teams from several rounds of zonal competition, to vie for the title at Shaw Sports Complex in Jinan University, Guangzhou on Saturday 3 August. An estimated 6,000 teams had started the tournament four months earlier and now it would be seen who ultimately prevailed.

The finalists had the pleasure of having some of badminton’s and China’s best players assigned to them as mentors/coaches: east – Cai Yun; north – Fu Haifeng; south – Chen Long; and west – Li Xuerui. China’s Head Coach Li Yongbo and BWF Secretary General Thomas Lund were also on hand to present medals and awards.

In the end, Suzhou (east) outlasted their rivals to lift the championship and to earn the honour of being hosted at the Wang Lao Ji BWF World Championships finals where their players hit shuttles into the crowd to mark the start of the last day’s action. One team member also participated in the presentation ceremonies. This was the fourth grassroots tournament hosted by RedBull China and it has grown appreciably since its inception in 2010 in which more than 2,500 amateur badminton enthusiasts competed. A year later, the concept evolved into China’s first national team competition, featuring an estimated 500,000 persons representing 3,500 teams from 17 provinces.

Last year, the scale of the event skyrocketed with matches being held in 28 provinces and 400,000 players participating. As a special treat to dovetail with the 2012 Olympics, the final was held in London at Central Hall in Westminster on Monday 6 August; the day after Olympic badminton concluded.

This season, the “Redbull Super Final” continued bold innovations, changing from its previous format of one match of Men’s Singles, Men’s Doubles and Mixed Doubles to a unique format featuring two matches in each of those three disciplines and – if necessary – one Women’s Singles match to decide the winner. In other words, teams had to win four out of seven matches. More than 500,000 amateur players took part, representing 163 cities in 30 provinces. She said RedBull China wants to capitalise on the country’s badminton craze and has sought to create a unique event which everyone can enjoy and relishes the opportunity to partner with BWF.

“RedBull China has been an official partner for the Major Events – Sudirum Cup, Thomas-Uber Cup and World Championship – and we truly appreciate all BWF’s efforts in bringing badminton to a higher level internationally.

1. A player stretches for the shuttle in the “RedBull Super Final” showdown on Saturday 3 August.