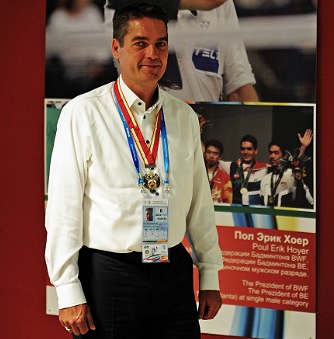 BWF President Poul-Erik Høyer has been awarded Russia’s highest accolade for “services in the development of physical culture and sport”. During his recent visit to Kazan for the 27th Summer Universiade, the newly-elected head of badminton’s world-governing organisation received the Badge of Honour from the Ministry of Sports in Russia. It is that department’s top award in the sphere of physical culture and sport and it was established in 1974.

An appreciative Høyer said he was thankful to be honoured in such a prestigious manner, noting the badge is bestowed on select individuals.

“I regard it as appreciation for the work entrusted to me as BWF President. I will cherish it,” he told media afterwards.

The presentation ceremony involved Russia’s Minister of Sports, Vitaly Mutko; President of Tatarstan (the Russian republic of which Kazan is the capital), Rustam Minnikhamov; and President of the National Badminton Federation of Russia, Sergey Shakhray, who is also a BWF Council Member.

Meanwhile, Høyer held talks with the offcials about the state and prospects of development of badminton in Russia and Tatarstan in particular, including the construction of a badminton centre in Kazan.

The BWF President applauded the Russians’ “ambitious strategy” for the development of badminton in the region.

CAPTION: BWF President Poul-Erik Høyer shows off his Badge of Honour from Russia’s Ministry of Sports while standing in front a giant poster commemorating his 1996 Olympics heroics – winning the Men’s Singles gold medal in badminton.