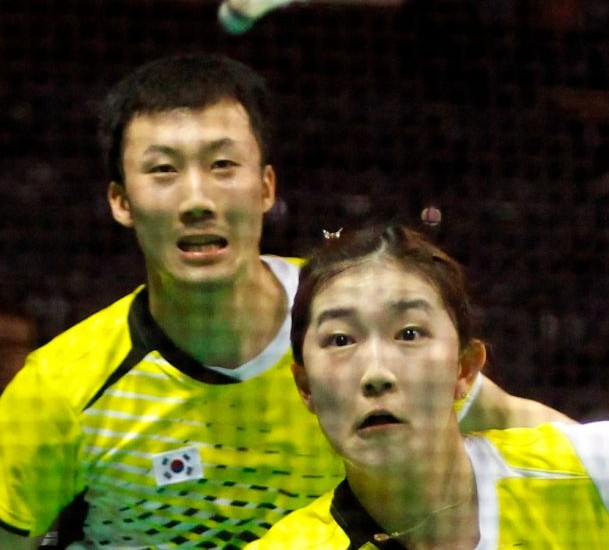 The Indonesian pair made its third straight major final – they were runners-up at the Australian GP Gold and winners in the Djarum Indonesia Open – by demolishing the challenge of world and Olympic champions Cai Yun and Fu Haifeng (China) 21-16 21-14. While the result was not unexpected, for the Indonesians had beaten the Chinese last week too, the convincing manner of the defeat was. The legendary Chinese pair was outplayed in just 25 minutes with Ahsan and Setiawan winning points at will. The performance was masterly with neither Cai nor Fu allowed to use their fearsome attacking game; the Indonesians extracted weak returns with a range of deceptive flicks and drives and Ahsan in particular whipped down some thundering smashes at sharp angles to leave the Chinese befuddled. Ahsan and Setiawan (left) will take on top seeds Lee Yong Dae/Ko Sung Hyun (Korea) who were too good for compatriots Shin Baek Choel/Yoo Yeon Seong (6) with a 21-15 21-19 victory in the other semi-final. The Indonesians have already beaten their Korean rivals in Superseries finals in Malaysia in January and last Sunday in Indonesia.

There were several close matches in the other categories. Among the hard-fought encounters was the Women’s Singles semi-final between fourth seed Wang Yihan (China) and Lindaweni Fanetri (Indonesia). Fanetri pushed Wang to the limit, eventually succumbing after 72 minutes. The Chinese had two game points in the first game, but Fanetri won four points in a row to take it. The second game was unusual. Wang had ten game points but Fanetri refused to give up, notching one point after another to win seven straight points before a mis-hit gave the game away. The third game was tight until 18, but Wang was able to find the extra bit of inspiration to close out the match, 20-22 21-17 21-18.

The Women’s Singles final will be a replay of the Olympics final, with Wang taking on compatriot and top seed Li Xuerui, who was hardly troubled by her junior countrywoman Yu Sun 21-13 21-11.

* In Men’s Singles, Tommy Sugiarto (Indonesia) reached his first Superseries final after a long battle versus veteran Nguyen Tien Minh (Vietnam), 20-22 21-19 21-15. Challenging him in the final will be defending champion Boonsak Ponsana (Thailand), who was a comfortable winner over Takuma Ueda (Japan) 21-8 21-15.

* Indonesia will figure in three finals tomorrow. Apart from the Men’s Doubles and Men’s Singles, they will challenge for the Mixed Doubles title. Tontowi Ahmad/Liliyana Natsir will hope to win their third Superseries title of the year when they take on Yoo Yeon Seong/Eom Hye Won (Korea; BWF home page).