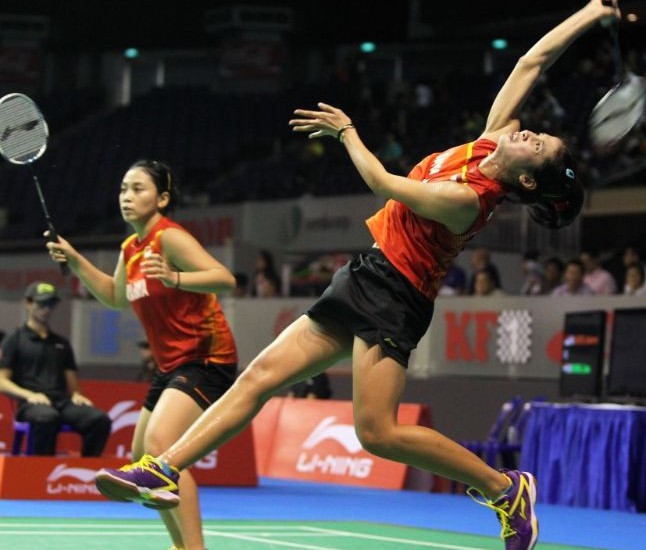 Matsutomo and Takahashi were brilliant tactically, dismantling the superior attacking game of the lanky Chinese. The Japanese cleverly manoeuvred the shuttle around, starving the Chinese of opportunities to attack. So frustrated were Cheng and Bao that they lost 11 points in a row in the first game. The second game was closer but the Japanese kept their lead throughout, coming away 21-9 21-18 winners.

There was a huge upset in Women’s Singles as second seed Saina Nehwal’s recent inconsistent form continued. She was vanquished by an inspired Lindaweni Fanetri (Indonesia), 17-21 21-13 21-13. Fanetri (centre above; hugging coach) will be the only non-Chinese in the semi-finals; the others being Yu Sun (qualifier), Wang Yihan (4) and Li Xuerui (1). Yu Sun, having ambushed defending champion Juliane Schenk in the second round, was just as dismissive of Tai Tzu Ying (Chinese Taipei), 21-17 21-11.

In Men’s Singles, defending champion Boonsak Ponsana made the last four quite comfortably. The veteran Thai had too many weapons for Malaysia’s Chong Wei Feng in the first game and although the Malaysian threatened to take the second with a 19-18 lead, Ponsana closed it out 21-10 21-19. Awaiting him in the semi-finals is Takuma Ueda of Japan.

* Germany’s Marc Zwiebler, who survived two marathon matches in the first two rounds, finally ran out of steam in the quarter-finals against Vietnam’s Nguyen Tien Minh (6). Zwiebler fought all the way in the first game, closing a 15-18 deficit, but Tien Minh edged past to take the game 23-21 and was leading 11-8 in the second when Zwiebler retired (centre below).

* Sunday’s Mixed Doubles final will be a Korea versus Indonesia affair as four pairs – two from either country – face their team-mates in tomorrow’s semi-finals. Indonesia’s Praveen Jordan/Vita Marissa face All England champions Tontowi Ahmad/Liliyana Natsir. The other semi-final will see Korean pairs, Shin Baek Choel/Jang Ye Na and Yoo Yeon Seong/Eom Hye Won, fight for the other spot in the final.