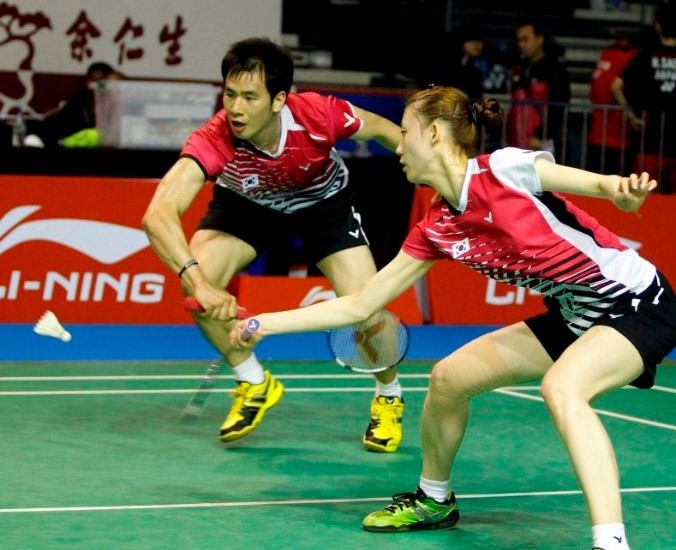 Zwiebler, who beat Chen Yuekun (China) in a 74-minute first-round match yesterday, demonstrated his mettle by overcoming Du in 70 minutes in the Men’s Singles second-round fixture. After splitting the first two games, the third went down to the wire at 17-all, but Zwiebler snatched the next two points for a decisive lead and wrapped it up 21-18 12-21 21-19 for his second consecutive win over a Chinese player. Meanwhile, defending Men’s Singles champion, Boonsak Ponsana (Thailand; left), kept on course with a 21-15 21-13 triumph over Wong Wing Ki of Hong Kong. Du’s compatriot Li Xuerui, the top seed in Women’s Singles, also had trouble but the Olympic champion avoided the upset. Li was taken the distance by Indonesia’s Belaetrix Manuputi, eventually prevailing 21-19 18-21 21-14. In fact, the day was a tough one for the favourites in Women’s Singles. Zwiebler’s team-mate Juliane Schenk  (3), who like him reached the final of the Djarum Indonesia Open last week, perished at the hands of Chinese qualifier Yu Sun. Schenk was sent packing 21-19 21-15.

* There were no upsets for China in Women’s Doubles, with all the three fancied pairs – Tian Qing/Zhao Yunlei, Ma Jin/Tang Jinhua and Cheng Shu/Bao Yixin – confirming their spots in the quarter-finals. Indonesia Open champions Cheng Shu/Bao Yixin (7) however were given a torrid time by Puttita Supajirakul/Sapsiree Taerattanachai (Thailand) before scraping through 18-21 21-19 22-20.

* The Mixed Doubles has been dominated by Indonesia and Korea so far. Three teams each from the two powerhouses made the quarter-finals. They were joined by Chris Adcock/Gabby White (England) and Lee Chun Hei/Chau Hoi Wah (Hong Kong). Adcock and White were comfortable winners over Kenichi Hayakawa/Misaki Matsutomo (Japan) 21-16 21-12.