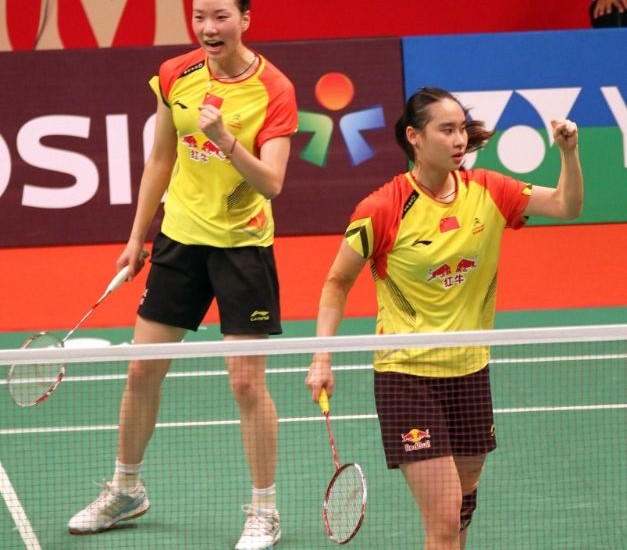 China’s dominance in Women’s Doubles appears in safe keeping as Bao Yixin and Cheng Shu joined the long honour roll with a gutsy, surprise triumph in the final of

The fact that this fearless duo overcame the usually impenetrable force of their experienced team-mates, Yu Yang and Wang Xiaoli, added further lustre to their maiden title, sealed 15-21 21-18 21-18 in an hour and three minutes inside the noisy Istora Stadium. China had boasted all four pairs in Saturday’s Women’s Doubles semi-finals.

Having disposed of some quality opposition en route to the Sunday showpiece, notably Olympic champions Zhao Yunlei and Tian Qing in the semi-finals, Bao/Cheng (BWF home page) hinted at the prospect of stirring up trouble for their confident compatriots who were on a 27-match winning blitz. From the outset, it was evident this match would not be the accustomed stroll which Yu/Wang have enjoyed in many recent outings. Neck-and-neck for much of the opening game, the pairs were only separated at 15-all when the seasoned campaigners pulled away.

Unflustered by dropping the first game, the lanky underdogs kept going for their shots with some inspirational play, Cheng using her height advantage to telling effect. Reward came as they held their nerves to clinch the second and third games, forcing their senior opponents into making uncharacteristic errors.

“We were not worried about losing the first game. We just focused on reducing our errors and playing well. We are very happy,” said a smiling Cheng.

Asked if today’s success is a sign of big things to come from them, the winners cautioned against such thoughts.

“All our (Women’s Doubles) pairs are very strong and any of us can win. We will always try our best,” noted Bao, thanking the frenzied fans for their support. category the hosts contested on finals day. Deprived of success in their home tournament since 2008, spectators therefore erupted in jubilation when victory was duly delivered, compliments of Mohammad Ahsan and Hendra Setiawan (right). Their sparkling display against Ko Sung Hyun/Lee Yong Dae (Korea) –  whom they had defeated in this year’s Malaysia Open finale also – ended 21-14 21-18.

The architect of the victory was Setiawan who was so tricky in the forecourt that Lee/Ko looked clueless at times. Setiawan created openings that Ahsan exploited with his big smash.

* A near-flawless performance saw Lee Chong Wei (centre below) capture his 32nd Superseries title, powering past Marc Zwiebler in the Men’s Singles final. The dominant world number one from Malaysia needed a mere 40 minutes to brush aside his German rival, 21-15 21-14.

* Germany endured further disappointment as Juliane Schenk lost a hard-fought Women’s Singles final to top seed Li Xuerui (China), 21-16 18-21 21-17. Though Schenk gave her opponent plenty to think about, she kept throwing in costly errors and these proved decisive. Down 10-16 in the third game, Schenk made a last spirited effort to narrow the gap to 15-16. Li (top left) managed to break her opponent’s momentum and surged home to take her first Superseries title of the year.

* One of badminton’s keenest rivalries took another turn today with China’s Zhang Nan/Zhao Yunlei (centre below) wresting the Mixed Doubles crown from Joachim Fischer Nielsen/Christinna Pedersen. The tough, 81-minute battle culminated 24-22 20-22 21-12 to the Olympic champions. This means they now lead the Danes 7-6 in career meetings. The result might have been different had the Danes not squandered two game points in the first game. They clawed back to claim game two but appeared sapped in the decider which the Chinese won easily.