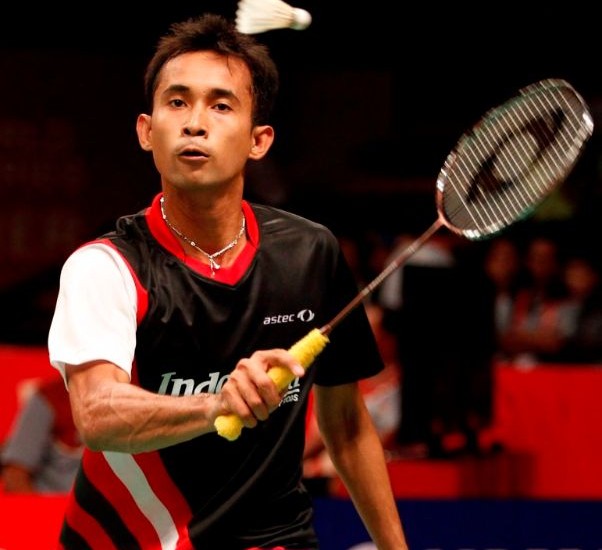 Spurred on by a boisterous crowd who witnessed Indonesians knocked out in the afternoon’s first three quarter-finals, the lanky 24-year-old – christened after the Greek god of wine – served up a centre-court victory worthy of a toast. In the process, he gave his countrymen incentive to come back to Istora Stadium tomorrow. The fact that he faces the iconic Lee Chong Wei of Malaysia for a place in Sunday’s final makes spectating prospects all the more tantalising.

In today’s riveting battle, Rumbaka – ranked No. 24 in the world compared to Du at No. 3 – produced a top-class performance, with few signs of nerves as the match went deep. If anything, the hometown hero looked more resolute after surrendering the second game, having taken the first comfortably.

Moving fluidly, smashing powerfully from the back and showing great control at net, Rumbaka (BWF home page) left Du short of ideas in the opening game. Du forced his way back in the second, but the Chinese uncharacteristically became erratic in the third, while Rumbaka surged on with ease. The final score: 21-15 15-21 21-9.

“It was tough but it was my goal to beat him. I have done it before and, with this crowd encouraging me, I felt I could do it. The fans are amazing; really inspiring. I look forward to giving my best again tomorrow,” said the winner.

Indonesia had plenty to cheer about in Men’s Singles as Tommy Sugiarto also advanced to the semi-finals. Sugiarto weathered the best of Guru Sai Dutt (India) 19-21 21-11 21-10, and will play Marc Zwiebler (Germany), while Lee Chong Wei decimated Boonsak Ponsana (Thailand) 21-10 21-7 in his quarter-final.

Also in the spotlight for the hosts was Men’s Doubles pair, Hendra Setiawan and Mohammad Ahsan, who ruthlessly dismantled the challenge of waning Chinese combo, Cai Yun and Fu Haifeng. The latter, seeded fifth, have not looked the part of Olympic champions in recent times and were bundled out of the tournament, 21-18 21-13.

In a master class, the Indonesians showed how to keep the big-hitting Chinese out of the game, denying them the opportunity to unleash their trademark smashes, and flicking and dabbing the shuttle into vacant spaces. The Chinese grew increasingly frustrated by their rivals’ sharpness as evidenced by a racket-destroying outburst from Cai Yun.

The Indonesians next take on Vladimir Ivanov/Ivan Sozonov (Russia), who are having a memorable tournament so far. The Russians beat Chris Adcock/Andrew Ellis (England) 21-18 21-18. The other semi-final will be an all-Korean affair, with Shin Baek Choel/Yoo Yeon Seong (8) tackling Lee Yong Dae/Ko Sung Hyun (2).