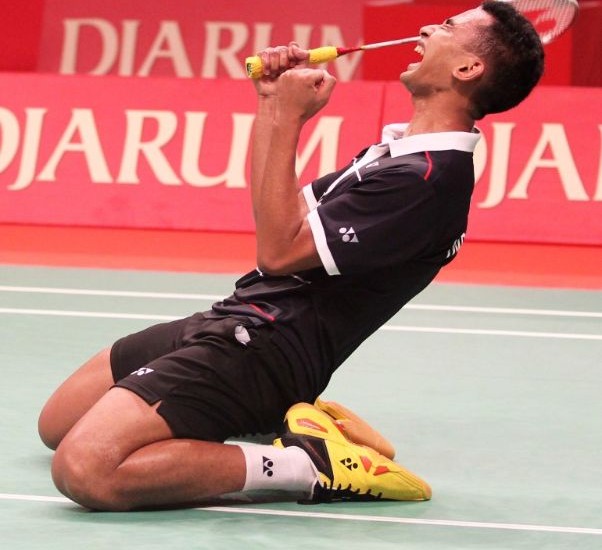 There was no dream farewell as the sparkling career of Indonesian idol Taufik Hidayat came to a whimpering conclusion tonight in the opening round of his home OSIM BWF World Superseries tournament.

The poster boy of Indonesian badminton for a decade and a half, Hidayat bid adieu to emotional compatriots, falling to India’s Sai Praneeth 15-21 21-12 21-17 in the Men’s Singles first round of the Djarum Indonesia Open Superseries Premier. The 31-year-old has a special bond with this event, having won it six times and equalling Ardy Wiranata’s record en route. Since Hidayat’s first victory here in 1999, he went on to become one of the world’s most celebrated badminton personalities and fans were understandably shocked as he succumbed meekly to defeat.

Considering his mediocre form of late, however, the result wasn’t totally unexpected. World No. 55 Praneeth, one of India’s fast-improving youngsters, fought back from a first-game loss to take the second at 21-12. Hidayat stayed close until midway in the third, but precision failed him at crucial moments. Praneeth kept up the attack and, with telling smashes in the closing stages, he found the legend either noticeably slow to react or erring with wide or netted returns.

It was an anticlimactic end to a great campaign which included the 2004 Olympic Men’s Singles gold medal and a glittering array of honours in the World Championships, Thomas Cup, Sudirman Cup and Asian Games.

Where Hidayat failed though Tommy Sugiarto (BWF home page) succeeded, giving the noisy partisan crowd a lot to cheer about with a first-ever victory over title favourite Chen Long of China earlier today. This was one of several shocks that resonated around the Istora Stadium. Chen – who had never lost a game furthermore a match to his Indonesian rival in six meetings – was stunned with a 21-11 21-18 execution.

Hidayat’s friend and three-time winner of the Indonesia Open, Lee Chong Wei (Malaysia, 1) survived a similar fate against China’s Wang Zhengming. The latter had match point at 20-19 in the third game, but Lee won three straight points to advance to the second round.

* Men’s Doubles favourites Mathias Boe/Carsten Mogensen (Denmark, 1) bit the dust against Vladimir Ivanov/Ivan Sozonov (Russia) 21-17 25-23. The Russians  (centre below) led throughout the first game, but the second proved a tight battle. The Danes fought back from 15-18 to 18-all, but the Russians never gave up the lead, despite losing four match points. They eventually converted their fifth match point.