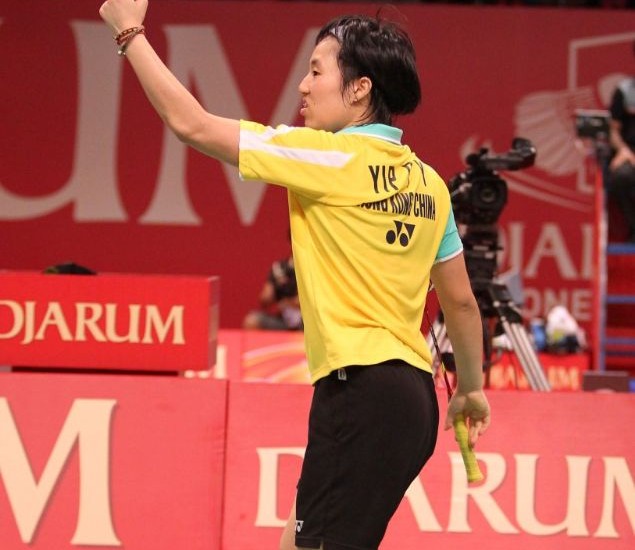 The first round of the Djarum Indonesia Open began with an unpleasant shock for China as both Wang Yihan and Wang Shixian lost in Women’s Singles today.

Third seed Wang Yihan, who won this title in 2011, and seventh seed Wang Shixian, winner of the Swiss Open, stumbled to first-round defeats against Yip Pui Yin (Hong Kong) and Busanan Ongbumrungpan (Thailand) respectively. This was Wang Yihan’s third first-round demise of 2013, after suffering a similar fate at the All England and Korea Open. Yip, once ranked No.8 but who has slid to No. 25 after average performances over the last two years, achieved one of her career’s biggest results versus the world No. 3. Wang Yihan led 6-2 in their battles and, after winning the first game 21-12, looked set to continue her dominance over her Hong Kong opponent.

However, Yip (BWF home page) refused to buckle, and kept a narrow lead for the most part of the second game. Although Yihan levelled a 17-19 deficit, Yip kept her composure to win the next two points and force a deciding game. She dominated the third game, piling on the pressure and winning the match comfortably at 12-21 21-19 21-18.

Later in the day, it was Wang Shixian’s turn to bow out. She ran into Thailand’s upcoming player Busanan Ongbumrungpan 21-11 9-21 21-19. Interestingly, Ongbumrungpan had lost to Shixian at the same stage in this event last year.

* The first round of Men’s Singles starts tomorrow. Qualifiers – who yesterday started their quest for the main draw – include Andre Kurniawan Tedjono, Riyanto Subagja (both Indonesia), Sai Praneeth (India) and Kazumasa Sakai (Japan). Sai Praneeth will have the opportunity of playing Indonesian idol, Taufik Hidayat, who has announced this will be his final tournament.