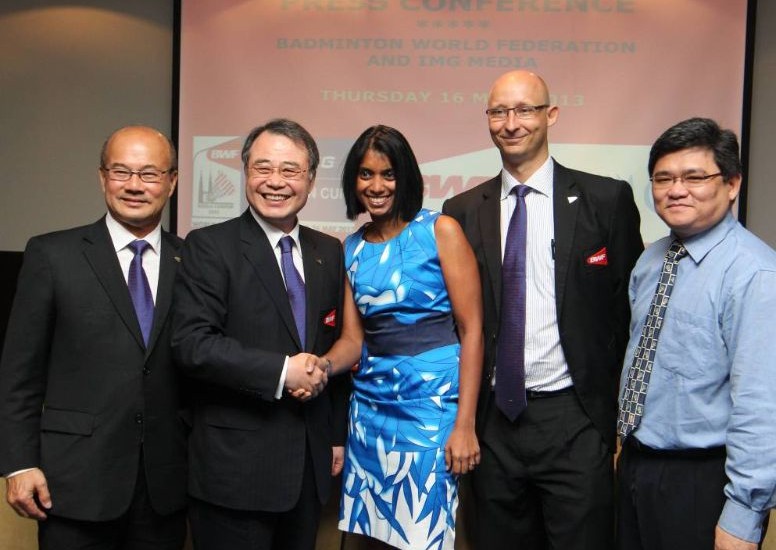 The deal, which comes into effect with the start of the 2014 Superseries cycle next year, will see BWF’s media-rights earnings jump four fold as badminton’s world-governing body capitalises on the sport’s increasing global popularity and profile. The BWF events are currently televised in more than 160 countries, with more than 5,000 hours of coverage yearly. Additionally, after just 18 months, BWF’s online channel boasts 22 million views with fans already watching 70 million minutes of badminton. The new agreement will look to improve on these solid figures.

“I have said before that my goal has been to strengthen BWF’s financial position and this agreement with IMG further ensures that. BWF is guaranteed higher revenues from this deal than ever before for media rights,” said BWF President Dr. Kang Young Joong (centre, at left).

“This exciting partnership with IMG will allow BWF to explore interesting, new opportunities regarding how we can improve and expand the BWF brand and visibility through various media streams and products.

“Of course, BWF is keen to extend its live and delayed coverage of tournaments into new markets. Additionally, we will be considering how we can continue to exploit broadband technologies and use data to interact with and engage fans more. We are also looking at an enhanced magazine show, profiling badminton stars and events more prominently. There are many options for utilising media platforms and BWF will be seeking to maximise these.”

The consolidation of BWF’s media rights means IMG Media – a division of IMG Worldwide, the global sports, fashion and media company – will have exclusive rights to showcase all of the best badminton action worldwide, having secured the rights for the BWF Major Events (World Championships, Thomas & Uber Cups and the Sudirman Cup), the 12-stop BWF World Superseries tour which culminates in the year-end Superseries Finals and the Grand Prix Gold tour which for the first time sees its media rights centralised by the BWF. This is also the very first time the BWF is working exclusively with one global partner across all of its media rights.

“Badminton is growing as a commercial commodity and is among Asia’s leading and most popular spectator sports. IMG is pleased to partner with the BWF to further raise badminton’s profile, not only in the Asian marketplace – which is a booming sports hub – but also into other markets where fans are turning on to the fastest racquet sport,” said Michel Masquelier, President of IMG Media.

“This is an exciting time for badminton and IMG looks forward to this collaboration with BWF and badminton which has proven a best-practices model for sport business in Asia while continuing its global expansion.”

The Badminton World Federation (BWF) has its headquarters in Kuala Lumpur, Malaysia, with 179 Members Associations worldwide.

More information is available at www.imgworld.com.