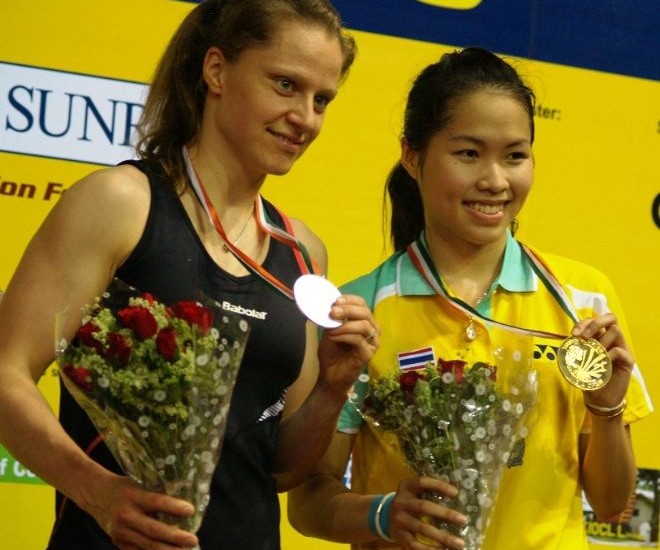 Intanon (right; BWF home page) has been on the verge of Superseries success in recent seasons and things finally fell into place at the Siri Fort Stadium. The young phenomenon continued her recent domination over second seed Juliane Schenk, registering her sixth straight conquest over the German, to wrest the Women’s Singles championship, 22-20 21-14.

The first game fluctuated wildly. Schenk (left; BWF home page) established a handy lead but, after a fall that required medical assistance for her right hand, she lost a sequence of points to find herself down 13-20. The German drew level as the pressure of losing one game point after another mounted on Intanon. However, the Thai sent an unreturnable cross-court drop and then beat Schenk at the net to take the first game. Intanon pressed her advantage in the second game, and though Schenk tried to change the momentum with some spectacular jump smashes, the Thai was just too good for the German on the day.

“She had that flow today,” observed Schenk. “I started well, but there was a little bit missing. The injury didn’t affect me, but I lost a lot of points after the timeout. There were a few errors from my side.”

Intanon said she lost seven game points in the first game because “I was rushing and didn’t control myself.”

In the Men’s Singles showdown, Kenichi Tago (Japan, 6) proved a worthy opponent for the great Lee Chong Wei (right; at left). The latter was expected to triumph but Tago made it difficult for the Malaysian, attacking and defending with zest. After Lee dominated the early proceedings with his sublime skills, Tago (left; at left) asserted himself in the second game. The smashes homed in with such accuracy along the flanks that even Lee, with his formidable defence, could not return some of the Japanese’s missiles.

“I wanted to win the India Open this time, because last year I lost the final,” said Lee. “Tago played well today. He has improved since the last time I played him.”

• Miyuki Maeda and Satoko Suetsuna (Japan, 4) reclaimed the India Open title they won in 2011. The India Open has been a lucky event for the Japanese duo, who confirmed their Olympic qualification at this event last year. Maeda and Suetsuna beat Christinna Pedersen/Kamilla Rytter Juhl (Denmark, 2) 12-21 23-21 21-18. The Danes had a glimmer of the title at 19-18 in the second game, but the Japanese were tactically astute on the big points.

“They had a good plan; we were standing too still,” said Rytter Juhl. “We made too many errors. It’s a shame but it’s been a good tournament for us.”