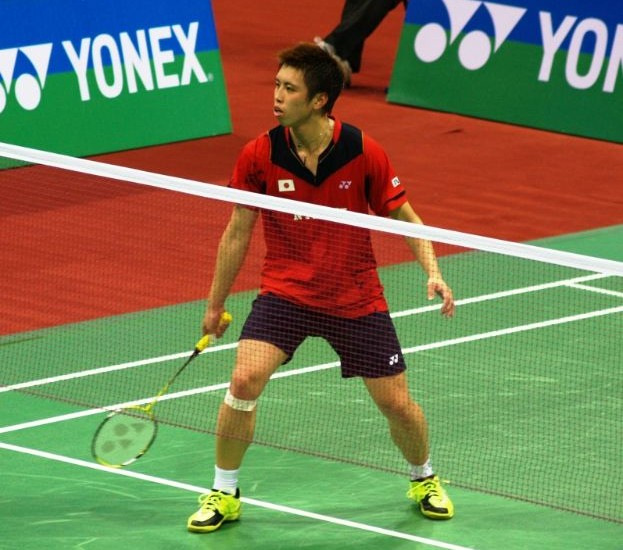 World No. 1 Lee, attempting to reclaim the Men’s Singles title he won in 2011, overcame a spell of poor form to cruise to his 11th straight win over Boonsak Ponsana (Thailand, 7). Ponsana won the second game thanks in large part to wayward play from Lee who did not attack or defend at his usually high level. The Malaysian corrected that flaw in the third game, playing at his customary high pace and attacking sharply and precisely, until Ponsana’s challenge collapsed. Lee took the match 21-11 18-21 21-8.

Kenichi Tago (Japan, 6) reached his first Superseries final in more than a year when he proved too crafty for home hope Anand Pawar. The Indian had upset third seed Hu Yun in the second round, and remained level with Tago briefly, but eventually Tago asserted his dominance. Pawar was impressive in brief patches, but was unable to string together a sequence of points to threaten Tago. The Japanese powered through 21-16 21-11.

“My defence was good,” said Tago (BWF home page). “The shuttle was slow today, so I was more confident in my defence. Lee Chong Wei is a fast player, and I will have to prepare to play fast in the final.”

In Women’s Singles, Juliane Schenk faces an opponent she had lost to five times in succession – Ratchanok Intanon (Thailand, 3). Schenk survived a tough encounter from Indonesia’s Aprilla Yuswandari, 21-18 21-18. Intanon, on the other hand, had too many weapons for India’s PV Sindhu, to dampen the home crowd’s hopes with a 21-12 21-6 victory. Sindhu has had a stirring run in the tournament, but Intanon (right) expertly dismantled her, using her sharp smashes to fire one winner after another. The Thai appeared tentative in her quarter-final, but today she was decisive, using her superior court craft to leave Sindhu desperately short of the shuttle.

• In Mixed Doubles, Tontowi Ahmad and Lilyana Natsir came to within a win of their third straight India Open title. The Indonesians had an unexpectedly easy match against Robert Mateusiak/Nadiezda Zieba of Poland, conquering 21-5 21-10 in just 20 minutes. Zieba said she had a stomach problem the night before, and wasn’t feeling well in today’s semi-final. Ahmad/Natsir play Ko Sung Hyun/Kim Ha Na of Korea in the final; the Koreans survived a tough encounter against Chris Adcock/Gabrielle White 21-14 12-21 21-17.

• In Men’s Doubles, Liu Xiaolong/Qiu Zihan (China, 8) came from behind in both games against Angga Pratama/Ryan Agung Saputra to win their semi-final in straight games, 22-20 21-19. The Indonesians led 19-17 in both games, but were unable to close it out when it mattered. Liu/Qiu play third seeds Lee Yong Dae/Ko Sung Hyun (Korea) for the title.