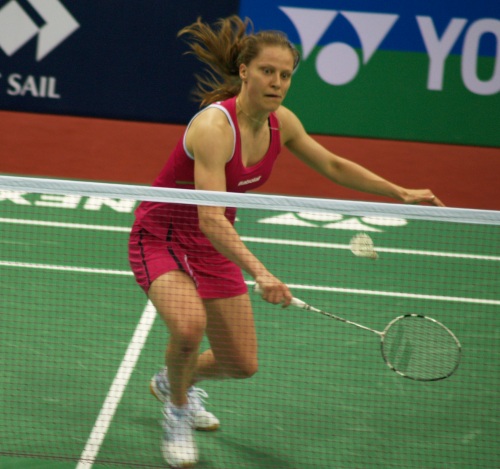 World No. 4 Juliane Schenk’s smooth progress through the draw of the Yonex-Sunrise India Open continued today as she entered the Women’s Singles semi-finals. She will play Indonesia’s Aprilla Yuswandari in the last four while, in the other half, India’s PV Sindhu (left) takes on third seed Ratchanok Intanon of Thailand. The latter struggled in her quarter-final by India’s Arundhati Pantawane, who at No. 92 is ranked 86 places below her. The Thai looked out of sorts for the most part. Her net game was effectively countered by Pantawane in the first game, and the Indian was able to smash through her defence at will. Although Intanon won the second game easily, she was stretched again in the third before emerging a 14-21 21-7 21-16 winner.

Sindhu had little trouble in ruthlessly disposing of the challenge of Japan’s young Yui Hashimoto who a day earlier had upset top seed Saina Nehwal. The Indian just didn’t allow Hashimoto to get into the game – she used her height advantage to good effect, her smashes homing in with accuracy and power. Sindhu led 19-7 in the first game but Hashimoto slowly inched back, taking nine points in a row amid mounting pressure for the Indian. However, once Sindhu got the next two points, her confidence returned and, from 14-all in the second game, she closeed it out 21-16 21-16.

Meanwhile, in Men’s Singles, top seed Lee Chong Wei (Malaysia) overcame a patchy spell in the second game to shut the door on H.S. Prannoy (India), 21-14 21-19. Prannoy gave a good account of himself, staying true to his accustomed aggression, and even led 18-12. At this point, Lee’s class came to the fore and he allowed the Indian just one more point before wrapping things up.

“I made a few mistakes in the second game,” Lee said. “He (Prannoy) played well; he has a good future.”

The Malaysian’s loss in the India Open final last year clearly still haunts him and he is determined to make amends.

“I remember losing in the India Open last time in the final, and this time I want to win it,” he said.

Lee takes on Boonsak Ponsana (Thailand, 7), while the other semi-final pits Kenichi Tago (Japan, 6) against India’s Anand Pawar. The last time Ponsana beat Lee was five years ago – the Malaysian has won their ten clashes since then.