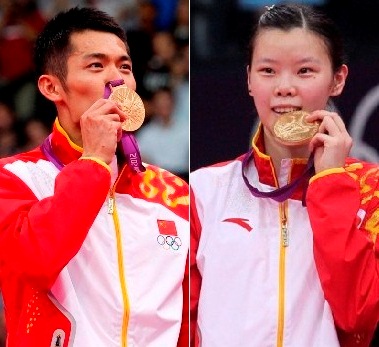 Some of badminton’s best will battle it out for Player of the Year honours for last season!

Among those nominated for the Male Player of the Year for 2012 are two-time Olympic gold medallist, Lin Dan of China (left: BWF home page), and his perennial rival Malaysia’s Lee In the reckoning for Female Player of the Year is world No. 1 Li Xuerui of China (right: BWF home page) who copped eight titles in 2012, including the Olympic and year-end crowns. Li’s compatriot, Wang Yihan, the Olympic silver medallist, has also been nominated as have India’s Saina Nehwal (Olympic bronze) and the winning Olympic Women’s Doubles pair Tian Qing/Zhao Yunlei (China).

Should a pair win either of these categories, they will share the annual award. The key criteria for nomination are:

• Exceptional and consistent performance across a calendar year

• Performance at the Olympics, BWF events and Superseries events

The 2012 choices for these awards will be made at the sole discretion of the BWF Council. The announcement of the winners and the presentation of prizes will take place at a gala dinner in Kuala Lumpur on Saturday 18 May, this year, following the BWF annual general meeting.

The BWF is pleased to recognise and congratulate recipients of various other awards for 2012.

They are as follows:

For more information on the BWF Awards, please click here.