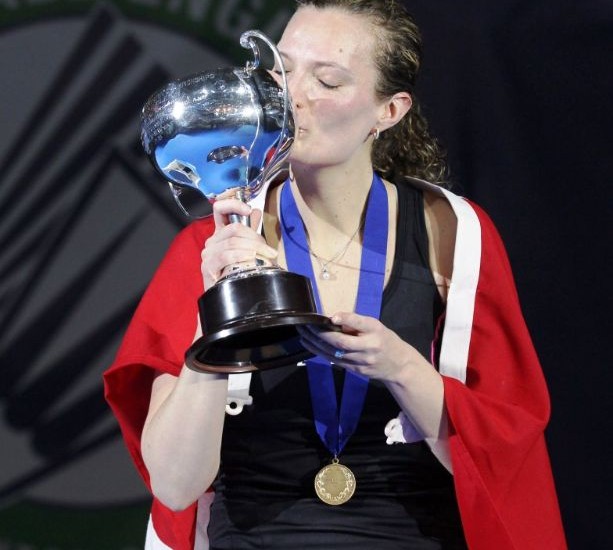 Hollywood could not have conjured up a more enduring script as Tine Baun bade goodbye to professional badminton today, crowned the 2013 Yonex All England Now a three-time winner of her favourite tournament, the Dane could barely believe her hard-fought success when the final point was won inside the National Indoor Arena in Birmingham before hundreds of cheering fans, some jumping to their feet and waving Baun’s national flag in celebration.

The fact that the veteran withstood the challenge of arguably the most talented of her sport’s next-generation sensations – Ratchanok Intanon of Thailand – made her last conquest before retirement all the sweeter.

“It’s such a great feeling…I’m so proud. Mentally it was very tough but physically not as hard as yesterday (Saturday’s semi-final). I gained so much power and motivation from winning yesterday. I felt I was doing my best and playing my game today. It’s fantastic,” said an ecstatic Baun (BWF home page).

All week she defied the odds, making her way through the draw at the expense of younger rivals in her last hurrah on court. The question was could the 33- year-old do it once more and against an 18-year-old versus whom she had a losing 1-3 record. After tight and tense early exchanges, Baun began to dictate, showcasing her powerful and skilful repertoire as Intanon was under fire in the first game. Though the Dane lost the second game, mainly due to errors at crucial stages, she re-established her dominance early in the third game and romped to an impressive victory; mixing winners from the deep with delicate net strokes that caught Intanon off-guard.

The tears in Baun’s eyes as the magnitude of her achievement sunk in said it all. Amid triumph, she spared a hug for the vanquished Intanon of whom she spoke glowingly.

“Ratchanok will definitely win this tournament, maybe many times. She is so talented. She has had some great results already and it is only the beginning of her career. She will be a big star,” predicted the woman who won All England titles in 2008 and 2010 also.

Intanon admitted wilting under the weight of expectation and pressure – not to mention the formidable occasion and the seasoned campaigner standing tall across the net. “Tine played very good and her shots were winning a lot. She is very experienced and I was nervous playing her. I am upset to lose but I love this tournament,” said the runner-up.

Malaysia’s Lee Chong Wei was in search of his third All England championship too but fate and circumstances were not as kind to him. He faltered 21-17 21-18 under an unwavering onslaught from China’s Chen Long (top left).

Clearly not at his best, Lee struggled from the outset to keep up with his rival in the Men’s Singles final. Looking tentative and unlike his normally aggressive self, he was quickly down 0-7 in the opening game. What hurt him most was that he was unable to get his tosses deep enough to prevent Chen from firing big smashes. The second game began similarly, with Lee trailing 1-6, but the Malaysian slowly worked his way back in, getting his length right and able to match Chen’s pace and power. The most engrossing period of the match unfolded and scores were level until 18, but an explosive shot from Chen gave him the advantage at 19-18 and he won the next two points to taste his maiden All England glory.

“The All England is very important. It is a world-class competition,” noted Chen Long. “This win gives me a lot of confidence. It’s great to be here and the crowd has been very supportive and passionate.”

• Yu Yang and Wang Xiaoli (bottom right) took just 27 minutes to dismantle the challenge of compatriots Cheng Shu/Zhao Yunlei 21-18 21-10 in the Women’s Doubles final. Yu and Wang’s title was China’s 16th win in that category over the last 18 years at the All England Open.

• Mixed Doubles partners, Tontowi Ahmad and Liliyana Natsir (Indonesia, 2; top right), defended their All England crown and secured their first Superseries title in almost a year with a 21-13 21-17 triumph over Olympic champions Zhang Nan and Zhao Yunlei (China, 5). Their record against the Chinese fifth seeds improved to 3-4 overall.