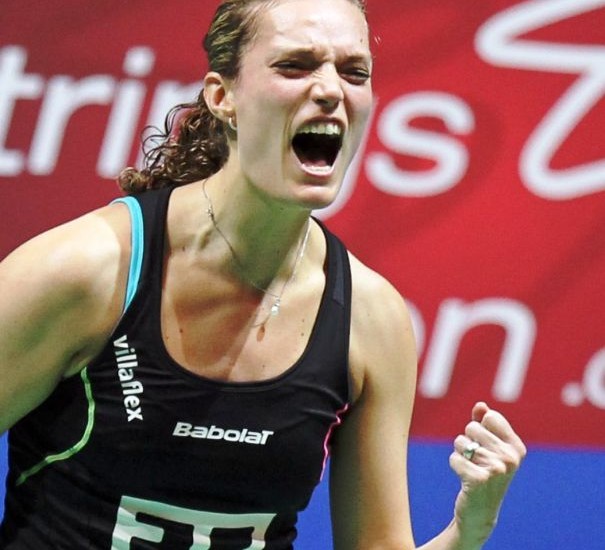 Summoning all her guile and experience, the evergreen Tine Baun rolled back the years with a dogged performance this afternoon, advancing to the Yonex All England 2013 finals – fittingly the last match of her career. In a scene worthy of a fairytale, the Danish veteran defied the 12-year age gap between her and rising Korean star, Sung Ji Hyun (top right), to wrest a stirring and memorable 24-22 19-21 21-19 outcome in the Women’s Singles semi-finals at the National Indoor Arena in Birmingham. The 33-year-old, two-time All England champion sank to her knees as her rival netted the final shot. Fans screamed in delight at the result; one which catapulted Baun into tomorrow’s showdown against Thailand’s teen prodigy, Ratchanok Intanon (middle right). The latter had earlier disposed of India’s Saina Nehwal in straight games, 21-15 21-19, and will certainly prove a sturdy test as Baun takes her final bow on badminton’s oldest stage.

“I definitely didn’t expect to be in the final after a year of losing in the quarter-finals. Of course you dream about getting into the final but I didn’t expect it,” declared a thrilled Baun (top left).

“I have grown in confidence throughout the tournament and played some great rallies so I’m excited. I want to relax and enjoy this moment and the main focus is to enjoy tomorrow. It has been an adventure…I was enjoying being out there, like I have with every match. Of course it’s mentally tough each time (knowing) it might be my last.”

Sung, 21, showed no sentimentality towards her senior opponent and looked to have the first game sewn up with five game points in her favour at 20-15. Somehow, the resilient Baun clawed back, point by point, to snatch the honours 24-22, on her third game point with a smash to the body. The second and third games were equally dramatic, momentum swinging like a pendulum to and fro and luck and the net intervening occasionally.

At 19-all in the decider, it was anyone’s match but perhaps destiny smiled on the player who yearned for it more. A smash at net, with Sung sprawled helplessly on the mat, took Baun to match point. Seconds later, the arena erupted noisily – Baun stood supreme! Appreciative spectators applauded both weary competitors as they exited after 76 action-packed minutes. “I don’t know how I got back from being so far down in the first set, maybe by instinct…I tried to focus on playing the next rally and not the result. Every time we have played it’s gone three sets…but I wasn’t afraid,” said a beaming Baun who displayed remarkable agility and a deft touch in net exchanges.

Meanwhile, Men’s Singles favourite Lee Chong Wei (Malaysia) entered his fifth straight All England final, overcoming Tanongsak Saensomboonsuk (Thailand) 22-20 21-8. Lee will have to beat Chen Long (China, 2) to regain the title he won in 2010 and 2011. Chen (bottom left) resisted the spirited challenge of Denmark’s Jan O Jorgensen to win 21-19 22-20, despite trailing the loser in both games.

• The Men’s Doubles semi-final between Qiu Zihan/Liu Xiaolong (China) and Hendra Setiawan/Mohammad Ahsan (Indonesia) was a tense battle. The Chinese took off at express pace against the Indonesians, who had little idea of what hit them in the first game.

However, the experienced Hendra Setiawan showed the way as the Indonesians reduced the pace of the game by resorting to soft touches and flicks, preventing the Chinese from employing their aggressive style. Having won the second game and with a 13-7 lead in the third, the Indonesians seemed to have sealed it, but things went horribly wrong. Ahsan suddenly became erratic under pressure and the Chinese rocketed to • The Women’s Doubles final will be an all-China affair. Top seeds Yu Yang/Wang Xiaoli play Cheng Shu/Zhao Yunlei. The record is heavily against Cheng/Zhao. They have lost all five previous matches to the defending All England champions.

FINALS (in order of line-up):