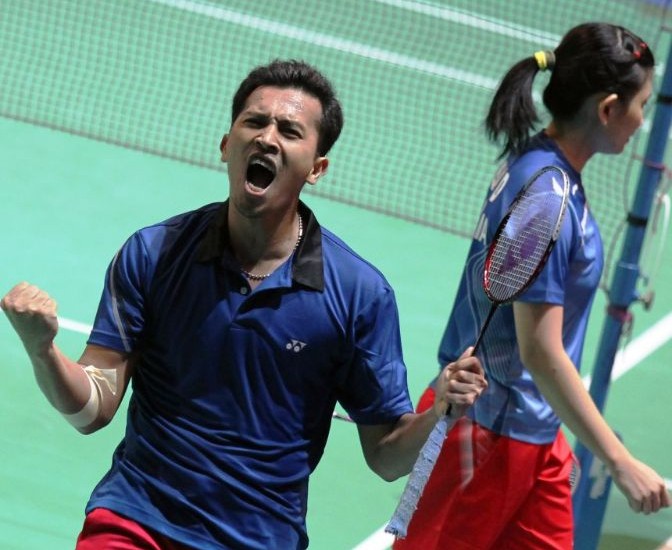 Xu/Ma, who reached the semi-finals of all 12 events they participated in last year (they won five Superseries and an Olympic silver medal), crashed out to Rijal and Susanto 16-21 21-13 21-18 for the biggest upset on quarter-finals day at the National Indoor Arena in Birmingham.

Despite their loss, there will be solid Chinese representation in tomorrow’s semi-finals. Rather surprisingly, the Women’s Singles will be the only event without a Chinese player.  The last Chinese in the quarter-finals, Wang Shixian (6), was outlasted in a 73-minute battle by Saina Nehwal (India, 2). Nehwal (top left) takes on Ratchanok Intanon (Thailand, 8), who beat Germany’s Juliane Schenk (4) 13-21 21-12 21-8, while Danish veteran Tine Baun (7) will be up against Sung Ji Hyun (Korea, 5).

There was little to choose between Nehwal and Wang but Nehwal eventually prevailed 23-21 19-21 21-16. The match was reminiscent of the Indonesia Open quarter-final last year, when Nehwal needed 96 minutes to overcome Wang. This evening Nehwal again won on the strength of her astonishing retrieval ability. She was particularly brilliant in the forecourt, lunging forward to pick the shuttle inches off the mat as Wang sent steep drops from all angles. A frustrated Wang frequently looked on in despair as her best shots were retrieved by the indefatigable Indian. However, the surprise package in Men’s Singles has been Thailand’s Tanongsak Saensomboonsuk (top right) who has enjoyed a superb run so far. The 22-year-old got through two rounds of qualifying and beat the fancied likes of Hu Yun (Hong Kong) and Sho Sasaki (Japan) before coming up against Tommy Sugiarto (Indonesia) tonight. His impressive 21-17 21-11 win over Sugiarto gives him an appointment with top seed Lee Chong Wei.

• Japan’s Hiroyuki Endo and Kenichi Hayakawa (bottom right) showed the resilience that typified their performances last year in a come-from-behind 16-21 21-12 21-19 victory over Korea’s Kim Ki Jung and Kim Sa Rang. The energetic pair advanced to the Men’s Doubles semi-finals where they meet Maneepong Jongjit and Nipitphon Puangpuapech of