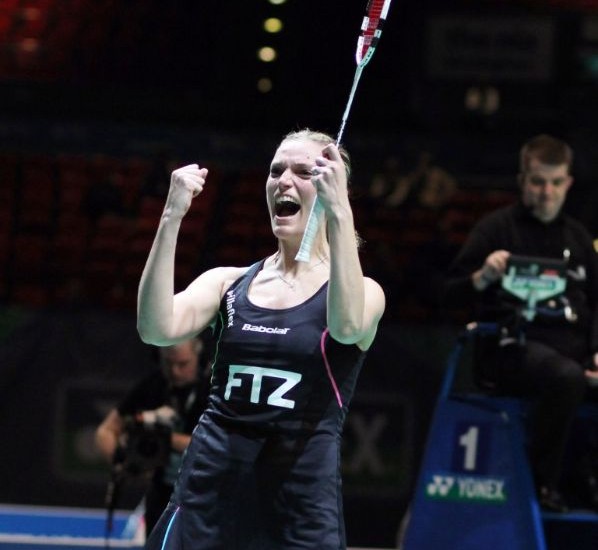 Two-time All England champion, Tine Baun, survived some anxious moments today before confirming her place in the Women’s Singles quarter-finals of this year’s event.

Playing in her last tournament, Baun was tested in the second game by China’s Han Li, who looked set to take the match into a decider. The Danish veteran won

the first game comfortably, but some wild shots and inaccurate strokeplay found her in trouble in the second. Han led 16-12 and 19-16, but Baun composed herself and came up with crisp winners when it mattered. The crucial point came at 19-all, when Baun played a sharp drop to Han’s forehand, and the Chinese decided to leave the shuttle, which was called in. Although Han saved one match point, Baun gained another after a long rally and finally sealed the 21-13 22-20 win with a smash to Han’s body.

The standout match in Women’s Singles was Japanese veteran Eriko Hirose’s victory in a marathon encounter over Korea’s Bae Yeon Ju. It was a thriller all the way, with Bae winning the first game after saving two game points, and losing the second game after holding match point at 20-19. The Korean again had her opportunities with leads of 17-12 and 18-15 in the decider, but Hirose (right) was magnificent as she refused to give up, and emerged a 20-22 22-20 21-19 winner, in a match that took an hour and 13 minutes. This was Hirose’s second three-game match, after her opening-round win over Michelle Li of Canada which stretched to 59 minutes. For her troubles, Hirose gets another Korean, No. 5 seed Sung Ji Hyun, for a place in the semi-finals.

After the slew of first-round upsets, the second round went more or less according to seeding, except in the Men’s Doubles which saw the No.1 and No.2 seeds ousted. Top seeds Mathias Boe and Carsten Mogensen (Denmark) were beaten in a three-game battle by the young Chinese combination of Qiu Zihan/Liu Xiaolong (left) 11-21 21-11 27-25 in one hour and nine minutes. The Chinese saved three match points before conquering on their own fourth match point. No. 2 seeds Koo Kien Keat/Tan Boon Heong of Malaysia bowed out to Maneepong Jongjit/Nipitphon Puangpuapech (Thailand) 21-17 21-18.