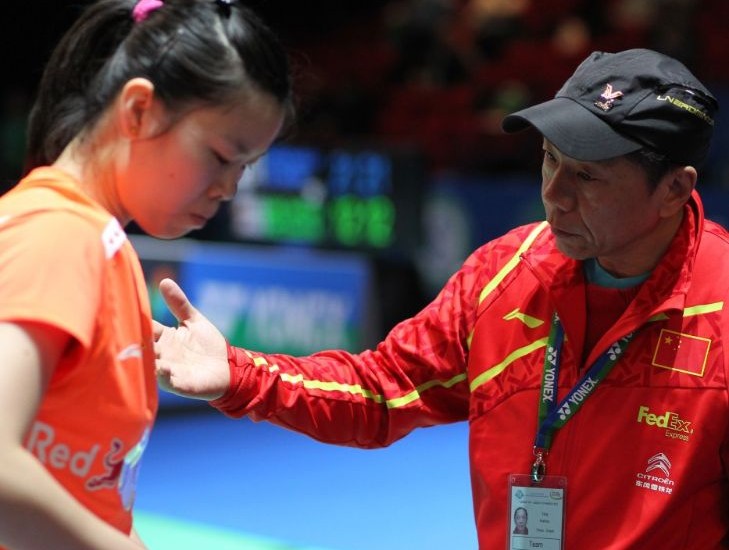 It was an “upsetting” day at Yonex All England 2013 as a number of stars were booted in the first round while others came perilously close to a similar fate. The National Indoor Arena in Birmingham was rocked by early seismic shocks with the exits of Women’s Singles defending champion Li Xuerui and her Chinese compatriot, Wang Yihan, who was the No. 3 seed and 2009 champion. Not in recent history has a similar spectacle unfolded as both crashed out in straight games. Li – the winner of eight major titles last year, including the coveted Olympics – was dismissed 21-18 21-18 by Korea’s composed Bae Yeon Ju (left). Meanwhile, Wang could not negotiate Indonesia’s Lindaweni Fanetri; the latter triumphing 21-12 21-19. Ye, suffered a 19-21 21-19 22-20 demise to the lesser-known Lukasz Moren/Wojciech Szkudlarczyk of Poland. Amazingly, the Poles saved three match points as they won five points in a row from 17-20 in the third game. Men’s Doubles Olympic champions Cai Yun and Fu Haifeng conceded a walkover to Ricky Karanda Suwardi/Muhammad Ulinnuha (Indonesia).

Malaysia’s star, Lee Chong Wei, looked to be joining the queue at the airport when he lost the first game of his Men’s Singles match to Wong Wing Ki of Hong Kong (both, bottom left) and then faced match point in the third game. However, the veteran’s nerves and experience held and he squeezed into the second round 13-21 21-6 23-21. The loss of the top Chinese women has put all eyes on No. 2 seed Saina Nehwal of India who is now favoured for her maiden All England title. However, she too did not have an easy start, weathering a tough challenge from young Thai, Sapsiree Taerattanachai, 21-8 18-21 21-16. Nehwal now meets Indonesia’s Belaetrix Manuputi instead of Japan’s Minatsu Mitani as expected. Mitani, winner of last year’s French Open Superseries, was outclassed 21-14 21-8 by Manuputi.

• Indonesian legend Taufik Hidayat failed to make an impact at his last All England, falling 21-16 21-11 to Sho Sasaki of Japan in Men’s Singles.

• Sourabh Verma, who entered the main draw after two tough rounds of qualifying, saved two match points against Dionysius Hayom Rumbaka to enter the second round of Men’s Singles. Verma held off Rumbaka in an hour-long battle, 10-21 21-14 24-22.