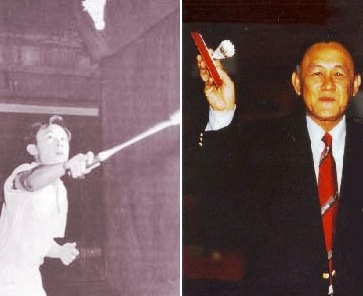 “My aim was always to set a benchmark for others to meet. If we were to gauge our progress it is through surpassing our forefathers.” This visionary insight from Malaysian and world badminton legend, Datuk Eddy Choong, highlights what motivated and drove him throughout a stellar career – the pinnacle of which was his four-year vice grip on the All England Men’s Singles title (1953, 1954, 1956 and 1957).

The 82-year-old, who passed away yesterday afternoon in his homeland, was revered in the badminton world for his amazing string of success both as a singles and doubles player; teaming up with his brother David in the latter pursuit. In total, Choong counted 450 titles; 75 international championships in 14 countries. He was also a member of Malaysia’s triumphant Thomas Cup squad in 1955.

This famed son of Penang was part of the Asian wave in the 1950s that transformed badminton which was previously a European-dominated sport. Standing just five feet, four inches, he literally looked up to many rivals – on court however it was a totally different story.

In fact, his diminutive stature proved an advantage; his lightning speed and famous jump-smashes combining to be the undoing of countless opponents. Never resting on his laurels, the ambitious Choong was known to train tirelessly as well as research equipment and techniques that could improve his game. His dedication to this regime was likely among the reasons he enjoyed such longevity as a shuttler, winning the All England Veterans Men’s Doubles title at age 53.

Choong leaves behind his widow Datin Maggie Choong, four sons and five grandchildren. His remains will be cremated on Friday.

The BWF extends condolences to his family and wide circle of friends throughout the badminton community.

BADMINTON’S BEST: Datuk Eddy Choong (left) is pictured in his heyday. At right, Choong is honoured by the International Badminton Federation (IBF) with the Herbert Scheele Award for Outstandingly Exceptional Services. Presenting the award was then IBF President, Madame Lu Shengrong of China.