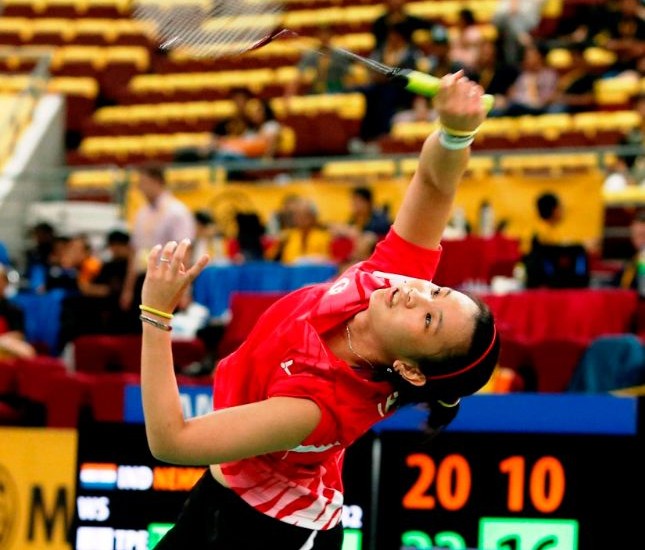 Top seed Saina Nehwal was undone by the craft of Tai Tzu Ying in a 35-minute Women’s Singles semi-final defeat at the Maybank Malaysia Open today.

Men’s Singles top seed, Lee Chong Wei of Malaysia, briefly looked in danger against Jan O Jorgensen (Denmark, 6), but asserted himself in the third game and ensured his place in yet another championship final. Lee, who boasts eight Malaysia Open titles, came through against Jorgensen 21-13 17-21 21-12, and will face Sony Dwi Kuncoro (Indonesia; top right).

It was the trickery of Chinese Taipei’s Tai (BWF home page) that scuttled the chances of India’s world No. 2 Nehwal. Tai’s deception and range of strokes left Nehwal chasing the shuttle throughout the match which ended 22-20 21-14 in favour of the 18-year-old. Tai’s reward is a final against China’s Yao Xue who got the better of Korea’s Bae Yeon Ju 21-15 21-18 in the other semi-final. Nehwal was in trouble early as she struggled to read Tai’s strokes. The Chinese Taipei player unleashed some unusual shots, both from the back court and at net, to leave the Indian guessing. Nehwal looked sluggish and was often left standing in the middle of the court as the shuttle found vacant spaces. To her credit, Nehwal fought back from 12-17 and 15-20 down to make it 20-all in the first game. However, another delicate net shot gave Tai her sixth game point which she converted.

The second game was Tai’s all the way. Nehwal’s accustomed fluid movement deserted her and, though she tried to smash her way out of trouble, Tai’s defence was solid and the Indian was left bereft of ideas.

In the Men’s Singles semi-final, Jorgensen threatened to ruin the day for home fans as he won the second game and went up 4-0 in the third. Things changed dramatically from there as Lee turned on his explosive game, smashing everything the Dane lifted. The Malaysian won 17 of the next 20 points to shut Jorgensen out of the match. • The closest match of the day was the Men’s Singles semi-final between Sony Dwi Kuncoro (Indonesia, 8) and Kenichi Tago (Japan, 2) which lasted 73 minutes. Kuncoro was a game up and in control at 19-16 in the second, but Tago won the next five points to take the match to a third game. The Japanese second seed had the advantage at 19-17, but a gritty Kuncoro equalised and finally clinched his third match point.