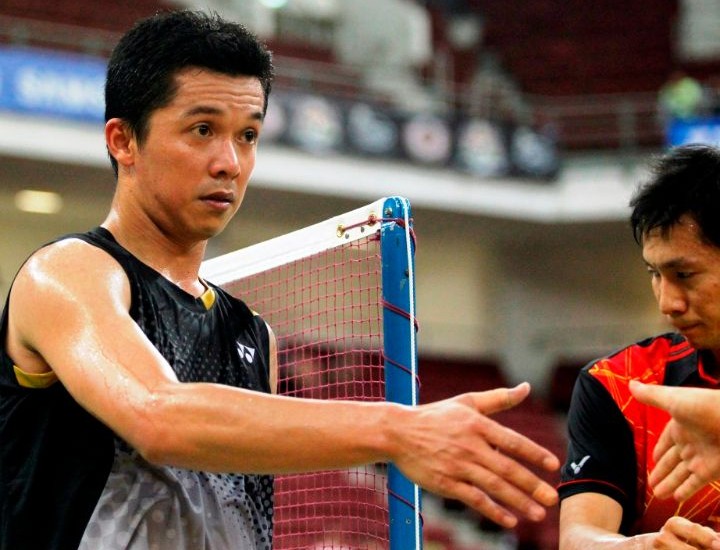 Afterwards though, he conceded a walkover to his second-round opponent Daren Liew (Malaysia). Now ranked a modest No. 17, the former World and Olympic champion struggled most of last year and fell in the first round of each of his last three Superseries outings. However, Hidayat (BWF home page) notched up victory at Putra Stadium, beating third seed Nguyen Tien Minh of Vietnam in Men’s Singles, 10-21 21-7 21-9, and would have been disappointed not to continue further into the week.

The biggest upset in Men’s Singles was that of seventh seed Wang Zhengming (China), who was ambushed by qualifier Suppanyu Avihingsanon. The 21-16 21-16 victory gave the Thai a second-round appointment with birthday boy, Hans-Kristian Vittinghus of Denmark (top right). The latter celebrated reaching 27 years old with an efficient 21-9 21-14 win over Sri Lanka’s Niluka Karunaratne.

Another veteran on the verge of retirement, Tine Baun, won her Women’s Singles match with some difficulty. The third-seeded Dane, in her penultimate tournament, was pushed all the way by the promising PV Sindhu (India), but Baun’s greater experience pulled her out of trouble. From 14-all in the third game, she won the next three points and did not allow Sindhu to catch up. She faces qualifier Yu Sun (China) next.

There were no major upsets in Women’s Singles. The only seed to exit was eighth seed Eriko Hirose (Japan) who went out in straight games (21-14 21-14) to Lindaweni Fanetri (Indonesia). The other seven seeds progressed into the second round. Top seed Saina Nehwal spent just 28 minutes on court, dismissing Gu Juan (Singapore) 21-12 21-15.

• Third-seeded Korean pair in Men’s Doubles, Kim Ki Jung/Kim Sa Rang, were shown the door by China’s Chai Biao/Liu Xiaolong. The 21-18 21-19 victory sets up an all-China second-round clash between the • Women’s Doubles favourites Ma Jin/Tang Jinhua (China) were stretched in their opening encounter against Lee So Hee/Shin Seung Chan (Korea; bottom right). However, the Chinese eased through in the third game (19-21 21-17 21-13) and will next play India’s Ashwini Ponnappa/Pradnya Gadre.