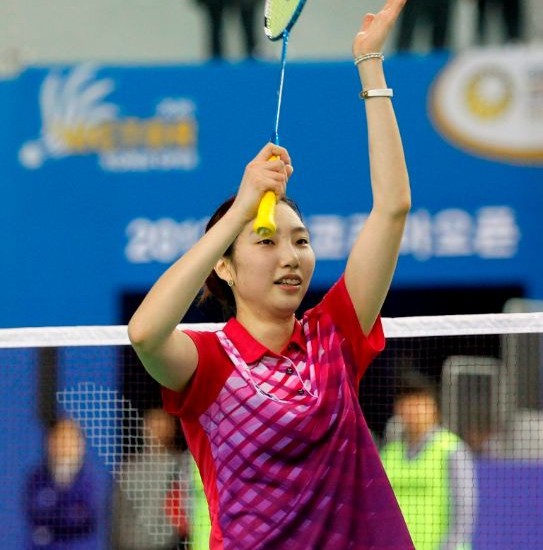 22-20, but Du Pengyu could not do likewise versus defending champion Lee Chong Wei (top right) in the Men’s Singles showdown. The world No. 1 Malaysian exacted revenge for his recent loss to Du at the year-end finals in Shenzhen, overwhelming the promising Chinese 21-12 21-15.

It was a great day for the hosts as Koreans won both finals in which they featured – the pair of Ko Sung Hyun and Lee Yong Dae setting the stage for Sung with a good win in Men’s Doubles. The other two finals – Women’s Doubles and Mixed Doubles – were all-China affairs.

Sung was elegant and fluid against Wang, using her long reach and steep hitting to dominate the Chinese world No. 5. She won the first game comfortably but the second was tougher. Wang made a great comeback from three match points down to make it 20-all, but Sung played a brilliant backhand net kill under pressure and then converted her fourth match point when Wang netted a return. The Men’s Singles final was expected to be a tight match. Lee Chong Wei had lost his last encounter with Du Pengyu at the BWF World Superseries Finals in December. However, the Malaysian showed no sign of being under pressure and he outclassed Du from the start. Lee’s explosive speed, deception and precision of jump smashes were too much for the world No. 5 from China to handle.

Du recovered to some extent in the second game as he stayed in the rallies and forced the occasional error from the world No. 1. After 10-all though, Lee stepped up the pace and Du could only watch in frustration as the match slipped away. • In the Mixed Doubles final, Zhang Nan/Zhao Yunlei extended their head-to-head record over compatriots Xu Chen/Ma Jin to 12-2. Xu/Ma won the first game comfortably but, by the third game, Xu looked exhausted and unable to move and made some uncharacteristic errors. The world and Olympic champions wrapped it up 13-21 21-16 21-13.

• In the first match of the day, Women’s Doubles world No. 1 pair Yu Yang/Wang Xiaoli (bottom right) overcame compatriots Ma Jin/Tang Jinhua 21-17 21-13. At 3-1 for Ma/Tang came the rally of the match and probably of the tournament – it lasted more than 140 strokes and was eventually won when Wang Xiaoli played a sharp cross net shot. The match featured several long rallies but the greater attack of Yu/Wang proved decisive as they won in 52 minutes.