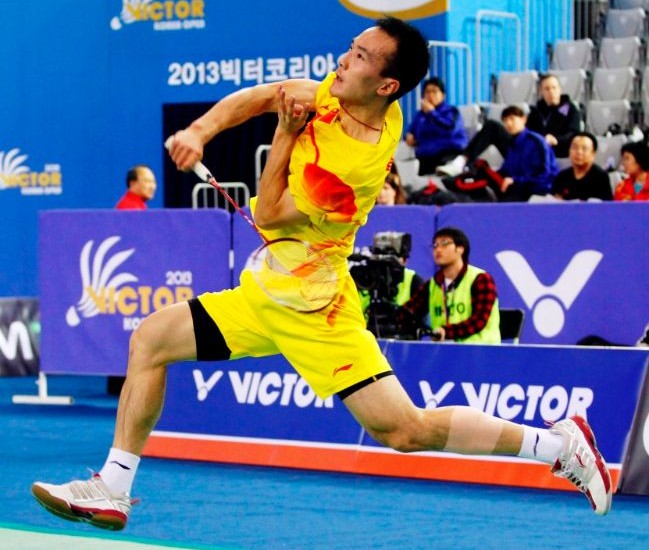 Wang Shixian of China has a shot at winning her first title in a year by advancing to her fourth consecutive Victor Korea Open final today.

Women’s Singles semi-finals. Her opponent in tomorrow’s final will be No. 7 Sung Ji Hyun (Korea), who was too good for Wang’s young compatriot Han Li in the other semi-final (21-14 21-17).

Among the interesting match-ups on the day was the Men’s Singles semi-final between Du Pengyu (China) and Sony Dwi Kuncoro (Indonesia). Du was in exceptional form last year, but failed to win a major title despite being in four finals. His rival, Kuncoro, had a 3-1 career advantage over Du, but the 24-year-old from China gave him no chance today. Du (BWF home page) was sharp and in full attacking mode. When Kuncoro attacked, Du threw himself around to retrieve the shuttle and keep it in play. The high pace of the Chinese began to tell on Kuncoro, and he slowly withered under the onslaught. Although he shifted tactics, trying to engage Du in baseline rallies, the Chinese had an answer to everything. The Indonesian made a last-ditch effort from 12-18 to come within a point of Du, but an error at the net helped the Chinese seal the match 21-12 21-17.

Another encounter that held promise was the Mixed Doubles semi-final between Olympic champions Zhang Nan/Zhao Yunlei (China) and Joachim Fischer Nielsen/Christinna Pedersen (Denmark). The Danes held a 6-4 advantage, including two wins at the recent BWF World Superseries Finals, and might have expected to get the better of their opponents. However, Zhang/Zhao totally outfoxed Fischer/Pedersen, both of whom looked off-colour, perhaps because Pedersen had played a 70-minute Women’s Doubles semi-final earlier in the day.

The second game was a washout, as the Danes could muster only three points in a 21-16 21-3 defeat. Zhang/Zhao will play familiar rivals Xu Chen/Ma Jin in the final. The Olympic champions have a 11-2 record against their compatriots, and it will be interesting to see if Xu/Ma can reverse their fortunes.

• Men’s Singles top seed Lee Chong Wei was a comfortable winner over Wong Wing Ki (Hong Kong) 21-11 21-18 and will attempt to defend his title against Du Pengyu. The Malaysian has a 6-1 career record against the Chinese but lost their last encounter.

• Men’s Doubles pair Lee Yong Dae and Ko Sung Hyun have been together only since October, but the Koreans have won 31 matches of the last 33 they have played. The French Open champions will be in line for their second Superseries title as a pair when they take on top seeds Mathias Boe/Carsten Mogensen (Denmark; at right) in the final.

• The Women’s Doubles final will be an all-China affair: Yu Yang/Wang Xiaoli versus Ma Jin/Tang Jinhua. Ma Jin has made the final of at least one event (Women’s Doubles or Mixed Doubles) in seven straight Superseries tournaments.