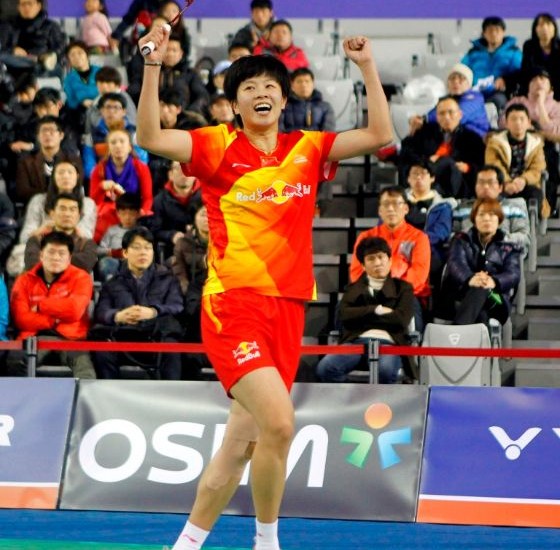 Han’s 21-14 15-21 21-12 upset was the most significant result of the Women’s Singles quarter-final matches at SK Handball Stadium. The defeat of the world No. 3 gave Han her first win against the Indian in three matches. It was an important triumph for the world No. 26, who has rapidly risen up the rankings over the last year. From world No. 92 in April 2012, she shot to a career-best No. 18 by December, thanks to her title victories at the Indonesia Open GP Gold and Australian Open GP Gold.

In Men’s Singles, Russian Vladimir Ivanov, who stole the show yesterday with his upset of Jan O Jorgensen (Denmark), could not One of the day’s closest matches was the Men’s Doubles quarter-final between Hong Wei/Shen Ye (China) and Lee Sheng Mu/Tsai Chia Hsin (Chinese Taipei). The Chinese Taipei pair bagged the first game and looked set to make the semi-finals with leads of 17-12 and 20-19, but Hong/Shen fought their way to a 25-23 win of the second game, before powering through in the third game. They will play top seeds Mathias Boe/Carsten Mogensen (Denmark), while second seeds Koo Kien Keat/Tan Boon Heong (Malaysia) face Lee Yong Dae/Ko Sung Hyun (Korea) in the other half. • Ma Jin and Tang Jinhua (China) are in the hunt for their third Superseries victory as a pair. After winning the Denmark and French Opens and reaching the second round of the China Open in 2012, the two have not competed as a pair until this tournament.

• China’s top two Mixed Doubles pairs Xu Chen/Ma Jin and Zhang Nan/Zhao Yunlei headed for another showdown by winning their quarter-final matches. However, Olympic champions Zhang/Zhao will be wary of semi-final opponents, Joachim Fischer Nielsen/Christinna Pedersen (Denmark; at right), who have a 6-4 career record against them.