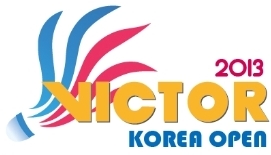 Badminton welcomes a new season with the Victor Korea Open Superseries Premier which began today at the SK Handball Stadium.

Most of the top players – except two-time Olympic champion Lin Dan – are competing so fans can expect high-quality action this week. The current world No. 4 from China has not taken part in any tournament since the London Olympics last August.

World No. 1 Lee Chong Wei (Malaysia) and principal opponent Chen Long (China, 2) will obviously be the ones to watch in Men’s Singles. However, there are some who can cause some damage, especially if the top guns are rusty early in the season.

Lee takes on No. 12 Wang Zhengming (China), and he will be wary of the Chinese youngster’s ability. China have a strong presence in both singles draws, with six Chinese in the Men’s Singles main draw. Fourth seed Du Pengyu, also of China, will be the dark horse – the world No. 5 reached four major finals last year and will be keen to begin 2013 on a good note. Then there is Chen Yuekun, winner of the Macau Open Grand Prix Gold, who qualified to the main draw. The other Men’s Singles qualifiers were: Lee Dong Keun (Korea), Pisit Poodchalat (Thailand) and Yong Zhao Ashton Chen (Singapore).

Of the non-Chinese players, Tommy Sugiarto (Indonesia), Parupalli Kashyap (India), Viktor Axelsen and Hans-Kristian Vittinghus (both Denmark) will hope to make it to the business end of the tournament.

Women’s Singles also boasts a formidable line-up. Li Xuerui (China), winner of an astounding eight tournaments in 2012, is on a 15-match unbeaten streak and will be overwhelming favourite for the title. Her compatriots Wang Yihan (2), Wang Shixian (5), Jiang Yanjiao (7) and Han Li will make it difficult for the non-Chinese opposition to break through. Their biggest threat will come from India’s Saina Nehwal (3), who beat a few Chinese players last year. Interestingly, Nehwal’s compatriot PV Sindhu, who upset Li Xuerui at the China Masters last year, is in her quarter. Sindhu will however have to get past Lindaweni Fanetri (Indonesia) in the first round.

• In the Women’s Doubles, super-successful pair Tian Qing/Zhao Yunlei have been split. Zhao is partnering Cheng Shu, while Tian will play with Bao Yixin. The top seeds are Yu Yang/Wang Xiaoli.