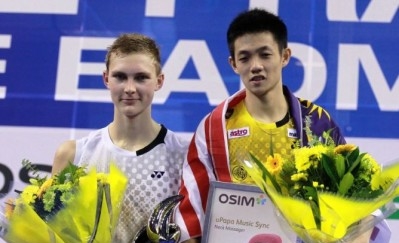 Long-time warriors Peter Gade, Taufik Hidayat and Lee Hyun Il have either retired or are on the verge of serving their last shuttle. So, which blossoming Men’s Singles players will thrill fans in years to come?

While the exit of such icons leaves a gaping void, the performances of certain young men offer optimism as the badminton world seeks the next shuttle superstars.

Even Malaysia’s most ardent followers would have been surprised with the bonus they got at the French Open 2012. Just a week after world No. 1 Lee Chong The significance of that triumph lay not just in the fact that it was a personal breakthrough for the promising Malaysian but more so in the realisation that a successor to the dominant Lee might finally have been unearthed. Liew is the first Malaysian after Lee to have won a title of this magnitude (after the Superseries circuit was introduced in 2007).

The most arresting aspect of the 25-year-old’s French Open victory was how uninhibited he played. Liew jumped and smashed with abandon from all corners of the court. He disposed of higher-ranked opposition like Hu Yun (seeded 7) in the second round, Sho Sasaki (2) in the third, and Jan O. Jorgensen (6) in the semi-finals. The latter match saw the Malaysian smashing relentlessly, recovering from a first-game deficit to stop Denmark’s Jorgensen.

In the final, he played a smart tactical game against Axelsen, forcing the prodigy to bend forward constantly near the net and not allowing him the opportunity to impose his attacking game. Interestingly, this was Liew’s first major final, and the fact that he did not let the pressure of the occasion get to him was impressive. It’s too early, of course, to predict whether Liew, currently ranked No. 15, is the genuine article or if he can achieve even a tenth of the illustrious Lee’s success. For the moment, however, Malaysia can feel upbeat about that result. Perhaps their cupboard is not bare as they may have feared.

Asked what he thought of the young man’s prospects, Lee Chong Wei nodded in appreciation. “Daren is already world No. 15,” he said. “He has the potential to get into the top ten.”

The retirement of Peter Gade has cast a question mark over who will carry European badminton’s banner in the future. Axelsen has emerged as the one likely successor. Already a fixture on the tour, the 18-year-old, whose lanky frame gives him great reach and a range of attacking strokes, has improved steadily over the last two seasons, and is a legitimate threat to many top players. However, there is still some way to go before he can challenge the likes of Lee Chong Wei, Lin Dan and Chen Long. He made the final of the French Open Superseries in October, beating Wang Zhengming and Kenichi Tago, and all of Europe will hope that his good results continue.

Meanwhile, the World Junior Championships in November ended on a happy note for Japan. Kento Momota (above) won the Men’s Singles gold medal (Nozomi Okuhara won the Women’s Singles gold) and Japan will look to him in future to aid the likes of Kenichi Tago (No. 5) and Sho Sasaki (No. 9). Never before in the 20-year history of the World Junior Championships had Japan won gold, and the country must have been delighted at this unexpected bounty.

Momota, ranked No. 84, has been talked about on the junior circuit for a while now. The 18-year-old had won the Badminton Asia Youth Under-19 Championships just a few months ago, and to follow that up with the World Junior title was surely exceptional.

Korea’s 24-year-old (below) Son Wan Ho is among those who sparkled briefly earlier this year, raising his country’s expectations of a possible successor to veteran Lee Hyun Il. Son has had some good wins over the last two years, but his best was at the India Open 2012, where he overcame second seed Peter Gade in the quarter-final, Kashyap Parupalli (India) in the semi-final, and top seed Lee Chong Wei in the final. The third game of the final saw him defy a resurgent Lee – who came back from 13-18 to lead 19-18 – but the young Korean kept his nerve and won the next three points for his first Superseries title.

Although Son has had two first-round exits in Superseries events since his unforgettable heroics in India, Korea will be hoping he can take the baton from

spearhead Lee Hyun Il. He is yet to be seen in action after the Olympics, though.

Men’s Singles badminton in China is synonymous with Lin Dan, Chen Jin and Chen Long, but in Du Pengyu and Wang Zhengming, they have two emerging players who are dangerous opponents for anyone. Du, 24, has taken his time in making it to the top ten but, with his brand of tireless and aggressive badminton, he will pose a threat to those above him. He reached four major finals this year – the Badminton Asia Championships, the Indonesia Open, the Denmark Open and the CR Land BWF World Superseries Finals.

In the Indonesia Open final, he showed his acrobatic abilities and tremendous resolve against Simon Santoso. He was sensational in Denmark, where he beat second seed Chen Long in the semi-finals and nearly upset top seed Lee Chong Wei in the final. The match was an absorbing contest, with Lee having to use all the tricks in his book to thwart Du’s relentless attack, winning 15-21 21-12 21-19.

“It hasn’t been easy for me,” said Du, after the final. “I’ve had to work very hard to get to where I am today.”

The Chinese world No. 9 got his revenge on the Malaysian in the opening match of the BWF World Superseries Finals in Shenzhen, China, last week, losing the final to Chen Long.

His young compatriot Wang Zhengming (top right), world junior champion in 2008, has had some promising results this year – his best coming at the home China Open, where he beat players like Sony Dwi Kuncoro and Kashyap Parupalli before being outclassed 21-19 21-18 by senior compatriot Chen Long in the final. Indian badminton has witnessed a resurgence in recent times. Saina Nehwal might be the best known of the lot, but there is an emerging crop in Men’s Singles as well. National coach Pullela Gopichand has high expectations of young players like Sai Praneeth, HS Prannoy, K Srikanth and Sameer Verma, among others. Of this group, Praneeth (right) is perhaps the most naturally talented – he has an effortless style of playing, and a variety of strokes that is the envy of lesser-endowed peers. The 20-year-old, ranked No. 66, won the Bahrain International Challenge in November beating No. 42 Niluka Karunaratne of Sri Lanka in the final.

“I’ve not had a problem adjusting to the pace of the Superseries circuit,” said Praneeth, adding that he has been able to “catch many of them with my deception”.

Praneeth’s teammate K Srikanth, 19 years old, is another talent on the horizon, having won the Maldives International Challenge in June, beating 2011 world junior champion Zulfadli Zulkiffli of Malaysia in the final. He was also impressive at the Macau Open GPG, reaching the semi-finals.