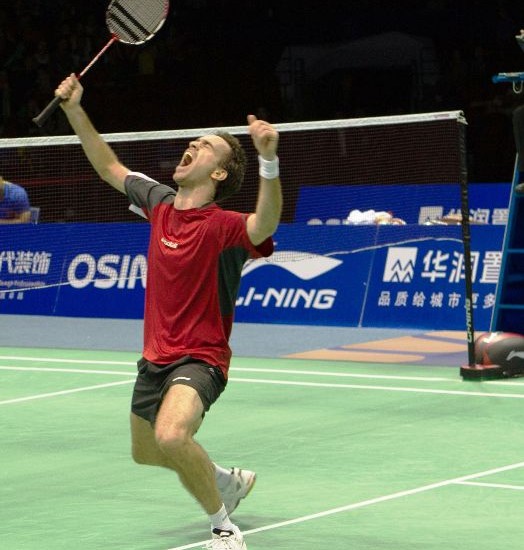 China and Denmark shared honours as the 2012 badminton season closed today with the crescendo of the CR Land BWF World Superseries Finals in Shenzhen, Joachim Fischer Nielsen and Christinna Pedersen only struck form in the second half of 2012, with good semi-final performances at the Olympics and Hong Kong Open. At this tournament, they were unstoppable, remaining undefeated in their three group matches and yesterday’s semi-final. Beating Olympic champions Zhang Nan/Zhao Yunlei last Wednesday night would have boosted the Danes’ confidence and it showed. Although the Chinese took the first game, Fischer and Pedersen came back into the match with some sharp and steady play. Fischer (featured image) was particularly impressive from the back, playing some unusual left-handed strokes that surprised Zhang and Zhao repeatedly. Pedersen outplayed Zhao at the net, and the Danes got a stranglehold on the match from early in the second game. Towards the end, Zhang made a number of unforced errors as the pressure played on his nerves. Fischer and Pedersen emerged comfortable winners, 17-21 21-12 21-14.

The Danes were dominant from the outset, using their height and steepness of shots to keep the opposition on the defensive. Upon winning the final point, the two spontaneously broke into the well-known ‘Gangnam Style’ dance; the second time this season they did so. Victory in the year-ending tournament secured the world No. 1 ranking for the European champions.

Having won the first of her two Doubles finals, Pedersen was eyeing a second celebration in Women’s Doubles. European champions Pedersen and Kamilla Rytter Juhl have never beaten world champions Yu Yang and Wang Xiaoli (above) in two previous meetings (including the group stage in Shenzhen) and the status quo would remain intact. The world champions, disqualified from the Olympics in summer, have shown great resilience – winning the second tournament since their comeback, 21-16 21-14 in 34 minutes.

Pedersen and Juhl went ahead 12-9 in the first game but, from then on, Yu and Wang lifted their game and were unchallenged for the rest of the match. Wang’s powerful smashes found no answer. The Danes appeared out of ideas as the hosts cruised to the championship. • Olympic champion Li Xuerui won an astonishing eighth title in 2012 with a 21-9 15-4 (retd) victory over compatriot and No. 5 Wang Shixian. This was Li’s 15th successive win since losing to Germany’s Juliane Schenk in the quarter-finals of the Denmark Open in October. Li recorded 56 wins in 61 matches this year.

• World No. 2 Chen Long (right) won his third title in a row, and fourth in his five tournaments, by beating compatriot Du Pengyu 21-12 21-13. With this win, Chen has won 23 of his last 24 matches. Incidentally, the last match he lost was to Du, at the Denmark Open semi-final.