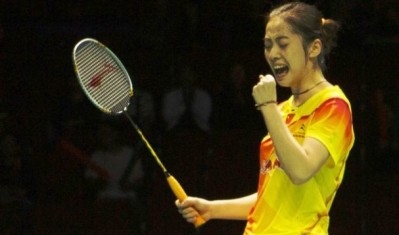 Denmark’s Mixed Doubles pair were the only non-Chinese winners this afternoon as the finals of the CR Land BWF World Superseries Finals began taking shape. World No. 6 Joachim Fischer Nielsen and Christinna Pedersen kept their unbeaten record alive against Sudket Prapakamol and Saralee Thoungthongkam (Thailand, No. 5) with a 21-19 21-13 semi-final win at Shenzhen Bay Sports Center, China. The Danes – who now have a 3-0 head-to-head record versus the Thai team – will play Olympic champions Zhang Nan/Zhao Yunlei in tomorrow’s year-end showdown. The match will be a replay of their Group B encounter, which Fischer Nielsen/Pedersen (right, at left) shocked the London 2012 gold medallists in straight games. In fact, the Europeans boast a 5-4 head-to-head record against their Chinese arch-rivals and must fancy their title chances.

In the other Mixed Doubles semi-final, Zhang and Zhao (right) were tested by their compatriots Xu Chen/Ma Women’s Singles No. 5 Wang Shixian (featured image) has not had an eventful year. Her only title came at the Korea Open in January, and she endured a series of early-round losses in the second half of the 2012. However, today she dominated No. 9 Ratchanok Intanon of Thailand, winning 21-12 21-19 in 42 minutes. Tonight, she will discover who stands between her and the perfect end to a frustrating year.