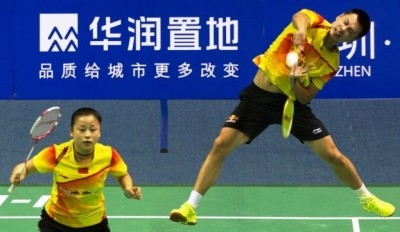 Among those who faced do-or-die situations was Women’s Doubles pair, Christinna Pedersen/Kamilla Rytter-Juhl. The Danes clinched second place in Group B with a determined 21-17 21-16 win over Japan’s Matsutomo Misaki and Ayaka Takahashi. When the match-ending point was secured, the winners screamed in delight inside Shenzhen Bay Sports Center. Pedersen (left), who will have her work cut out for her tomorrow as she also features in the Mixed Doubles semi-finals, fell to the floor while her partner punched the air.

Saina Nehwal also had to beat Juliane Schenk (Germany) in her Women’s Singles Group B match – and leave the rest to fate. The Indian overcame Schenk 21-7 21-18 and, despite losing her two other matches, later received an early Christmas gift on the adjoining court. Thai world No. 9 Ratchanok Intanon thwarted Tine Baun’s title ambitions, stopping the Dane 21-15 21-14 to notch her third victory. As a result, Nehwal and Baun ended with a win and two losses each. The semi-finalist was therefore decided on countback; Nehwal losing three games to Baun’s four. Nehwal (right) advances to tackle top seed Li Xuerui (China) while the other semi-final pits Intanon against Li’s compatriot, Wang Shixian. Hans-Kristian Vittinghus also began his last Men’s Singles Group B match aware that seizing just one game versus Liew Daren would be enough to secure a final-four berth, also on countback. The Dane lost 21-17 13-21 14-21 but was thrilled to advance. He plays Du Pengyu (China) while Hu Yun (Hong Kong) takes on Chen Long (China).

• In Mixed Doubles Group A, top seeds Xu Chen and Ma Jin (featured image) showed why they are such a formidable pair, routing All England champions Tontowi Ahmad/Liliyana Natsir in 32 minutes, 21-14 21-11. For their efforts, however, they get compatriots, Zhang Nan/Zhao Yunlei, in the semi-finals.