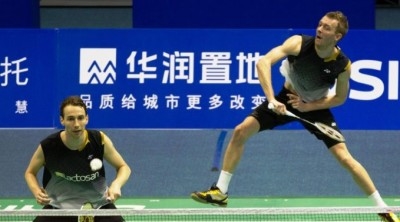 The Danes (featured image) took the last Group A match 14-21 21-12 21-14 to stay alive in the tournament at Shenzhen Bay Sports Center. Three pairs – the other being Malaysia – each ended with two wins and a loss. Two will advance to tomorrow’s semi-finals. In Men’s Doubles Group B, second seeds Hiroyuki Endo/Kenichi Hayakawa of Japan battled past the other Chinese duo, Hong Wei/Shen Ye, in a match stretching past an hour, 22-20 12-21 21-18. • Du Pengyu (right) finished his preliminary engagements with a perfect three wins out of three matches. Today the Chinese player overcame the tricky Boonsak Ponsana (Thailand), 24-22 21-23 21-8 to top Group A.

• Muhammad Rijal/Debby Susanto surprised Joachim Fischer Nielsen/Christinna Pedersen at the Denmark Open in October, but the Danes notched their third win in Mixed Doubles Group B with a 21-16 21-16 verdict over the Indonesians.