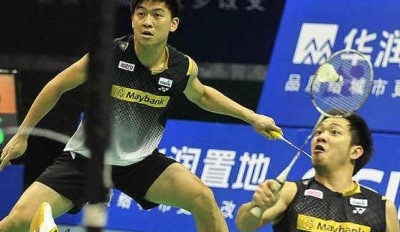 Facing Danish pair, Mathias Boe and Carsten Mogensen, they knew it was “win or go home” as they had already lost to top guns, Cai Yun and Fu Haifeng of China in Group A. Despite the withdrawal of Korean rivals Kim Ki Jung/Kim Sa Rang – whom the Malaysians (featured image) were due to play tomorrow – they could not afford a second Meanwhile, home team China continued their impressive run in all categories. Du Pengyu ousted Hong Kong’s Hu Yun 21-18 23-21 for his second win in Group A of Men’s Singles and, on the neighbouring court, Wang Shixian, got the better of Korea’s Sung Ji Hyun, 21-19 21-19 in Women’s Singles.

Juliane Schenk of Germany (left) shrugged off a slow start to put some urgency in her quest for Women’s Singles honours, with a come-from-behind win over fellow European, Tine Baun. The Dane took the first game in the Group B encounter, and was competitive in the second before wilting in the third. The scoreline: 14-21 21-16 21-8.

• Mixed Doubles exponents, Zhang Nan/Zhao Yunlei of China (below), were back in business – after their first-match loss – with a smooth 21-13 21-10 result over Indonesia’s Muhammad Rijal/Debby Susanto in Group B.

• A day after beating the Olympic gold medallists, there was no easing up by Denmark’s Joachim Fischer Nielsen and • Wang Xiaoli and Yu Yang continued their march to a third successive World Superseries Finals title in Women’s Doubles. Their opponents, Misaki Matsutomo/Ayaka Takahashi of Japan, were trounced 21-9 21-9 by the Chinese pair in Group B action.