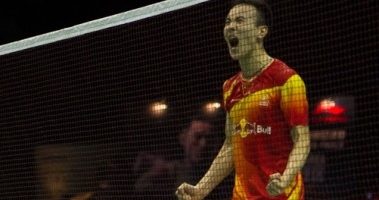 Top seed Lee Chong Wei’s campaign at the CR Land BWF World Superseries Finals started disastrously when he lost to No. 9 Du Pengyu in a close Group A match

China’s Du (featured image) accomplished what he narrowly failed to do a few months ago in the Denmark Open final. He showed tremendous resolve in the final set – despite trailing by margins of 6-12 and 11-16, Du slowly narrowed the gap and finally caught up at 18. Malaysia’s Lee (left) saved one match point at 19-20 but could not prevent his challenger from converting the second. Du wrapped the match 12-21 21-16 22-20. There were two walkovers from Korea’s doubles teams – Yoo Yeon Seong/Jang Ye Na (against China’s Xu Chen/Ma Jin in Mixed Doubles) and Eom Hye Won/Jang Ye Na (against Japan’s Matsutomo Misaki/Ayaka Takahashi in Women’s Doubles). These were due to an ankle injury sustained by Jang who was scheduled to compete in both events.

• Mathias Boe/Carsten Mogensen (right) had an unexpected early end to their opening fixture. Kim Ki Jung/Kim Sa Rang of Korea retired with the Danes leading 21-17 17-9 in their Group A Men’s Doubles encounter.