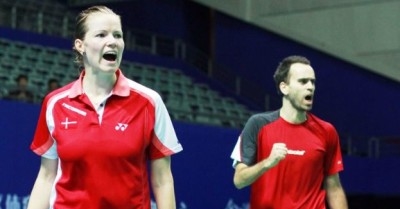 If either Mixed Doubles team pulls off a title victory, it will salvage some of the pain they felt at the Olympics. Playing on adjacent courts in the semi-finals, the Indonesians took on Xu Chen/Ma Jin, while the Danes faced Zhang Nan/Zhao Yunlei. China lost the opening game of both encounters and, for a brief moment, it looked like it would be a Denmark-Indonesia final but both Chinese pairs wriggled out of their predicaments and went on to contest the gold-medal match.

Ahmad/Natsir (left) have settled down as a combination after the retirement of Natsir’s former partner Nova Widianto. They had a sensational run in early 2012, winning 19 matches on the trot – taking the All England, Swiss Open and India Open during their relentless march. Their irrepressible form seemed to herald them as potential Olympic gold medallists and when they won the first game of their semi-final, they appeared to have peaked at the right time. However, Xu Chen and Ma Jin lifted their own intensity, and the Indonesians capitulated in the third game. Even though they lost the bronze medal playoff, they can look back with pride on a year that saw them win five titles and secure the No. 2 world ranking.

Joachim Fischer Nielsen and Christinna Pedersen (featured image) too might still be nursing hurt over their narrow Olympic semi-final loss, but the Danes did come away with the bronze. They were among the few teams to have a positive record against Zhang Nan/Zhao Yunlei, as they had won four of the six encounters going into the Olympics, but on semi-finals day, the Chinese held firm under pressure. The Olympic bronze was the biggest moment of the year for Fischer Nielsen/Pedersen who did not come close to winning any other title.

The dominant teams of the year were of course No. 4 Zhang Nan/Zhao Yunlei and No. 1 Xu Chen/Ma Jin (together; above). Even though the world No. 1 pair had an exceptional 2012, winning five Superseries – including four straight – they seem to have developed a jinx against their compatriots. They lost all four encounters (all finals), to trail their head-to-head 2-10. For their part, Zhang Nan/Zhao Yunlei had a flawless year, winning four major titles including the Olympics. Sudket Prapakamol/Saralee Thoungthongkam (Thailand) had some sparkling moments. Although both are over 30, and despite Prapakamol losing the sting of his big smashes, they have stayed in the elite levels of badminton by with a crafty display. The season saw the Thai pair winning the Indonesia Open beating local favourites Ahmad/ Natsir and top seeds Zhang Nan/Zhao Yunlei in the quarter-finals.

Chan Peng Soon/Goh Liu Ying (Malaysia) have made impressive strides in recent times, and the Malaysians were rewarded with two titles – the Malaysia Open GPG and the Japan Open Superseries. They have troubled top teams and, if they keep improving, should be the team to watch next year.

Yoo Yeon Seong and Jang Ye Na of Korea (above) failed to clinch a major title this season. Yoo has enjoyed a productive partnership in Men’s Doubles with Shin Baek Choel (Korea) too and he thrilled fans at the Denmark Open when he broke into a spontaneous ‘Gangnam Style’ dance after clinching the title. We might yet see such exuberance again if Yoo and Jang spring some surprises in Shenzhen.

The last unit to qualify was Muhammad Rijal/Debby Susanto of Indonesia; beneficiaries of the retirement of Japanese star Reiko Shiota. They had a steady year, marked by victory at the Chinese Taipei Open and final appearances at the Indonesia Open GPG and Macau Open GPG. They too will be seeking to make an impression in the year-ender.