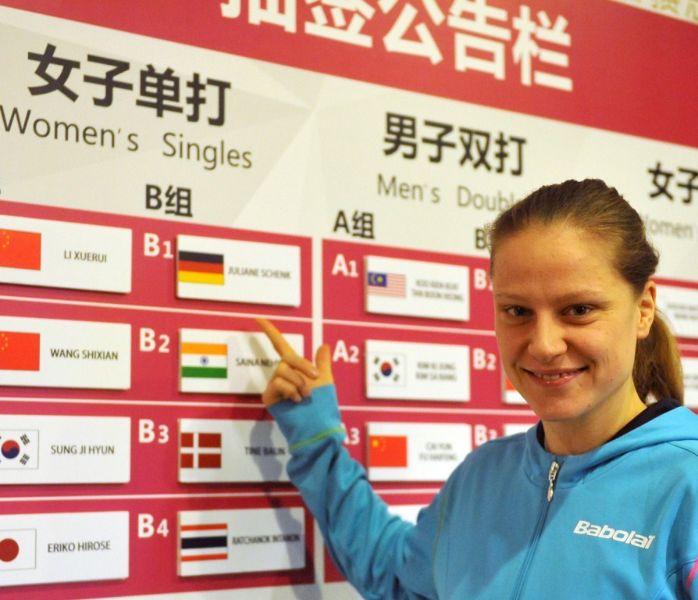 The groups were announced after today’s draw at the Shenzhen Bay Sports Centre where the tournament will take place, starting tomorrow at noon. In the Finals – part of the OSIM BWF World Superseries Premier tour – Malaysian Lee will be gunning for his fourth World Superseries Finals title after winning in 2008, 2009 and 2010. His principal rival, China’s Chen Long, is in Group B with Kenichi Tago (Japan), Daren Liew (Malaysia) and Hans-Kristian Vittinghus (Denmark).

Asked if the absence of Chinese opponents in her group will make it easier to qualify for the semi-finals, world No. 4 Schenk (featured image) smiled and joked that she was “a little unhappy (there are no Chinese in the group)…I don’t know what went wrong”.

Olympic champion Li Xuerui was modest about her superlative successes this year. “I think my progress this year is the result of all the preparation and hard work I’ve done in previous years,” Li told the media.

“This is the first time I’ve qualified for the Finals and I will compete to the best of my ability.”

The ‘group of death’ among all the categories is Group A of the Men’s Doubles. The group has Olympic finalists Cai Yun/Fu Haifeng (China) and Mathias Boe/Carsten Mogensen (Denmark), Olympic semi-finalists Koo Kien Keat/Tan Boon Heong (Malaysia), and Asian champions Kim Ki Jung/Kim Sa Rang (Korea). Consequently, the teams of Group B can breathe a little easier.

“I don’t know why the Japanese are not playing, but we will try to do our best,” said Fu Haifeng, while his partner Cai Yun stated that he was not worried about the draw. “I’m pretty satisfied with the draw. All draws are a bit of luck and we’ll do our best,” he said.

The four players at the press conference – Cai Yun, Fu Haifeng, Juliane Schenk and Li Xuerui – spoke glowingly of the venue and facilities. All said they expect a tough and intense competition to end the 2012 season.

N.B. In each category, the winner of Group A will play the runner-up in Group B and vice versa in the semi-finals. The Finals start tomorrow at 12 noon.