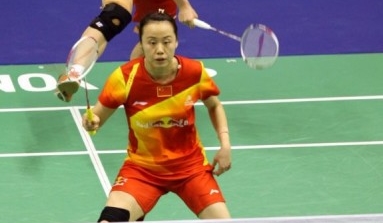 Who will it be though – Olympic gold medallists, Tian Qing and Zhao Yunlei, or the resurgent Yu Yang and Wang Xiaoli; the two-time defending Superseries Finals champions?

The two Chinese combinations share top billing in this discipline at the CR Land-sponsored season-ender which is part of the OSIM BWF World Superseries tour. Between them, they have captured the big titles this year and it would be a surprise if any of the other six pairs can overcome both of them.

Consider the stats – of the 12 Superseries events this year, either one or both these pairs participated in seven, winning six. The other two major tournaments – the Asian Championships and the Olympics – also went their way. The only aberration was the Denmark Open where Tian Qing and Zhao Yunlei (featured image) were beaten in the semi-finals. China, as expected, dominated Women’s Doubles through 2012, winning ten of the 12 Superseries. encounters. Their most recent clash was the Hong Kong Open final in late November – a thrilling, three-game affair.

Zhao Yunlei has been in brilliant touch both in the Women’s Doubles and Mixed Doubles (she won two Olympic golds), and the partnership with Tian Qing had yielded three Superseries titles (including the All England), and gold medals at the Asian Championships and Olympics. They have been the most dominant Women’s Doubles pair this year, and would be tipped to thwart Yu Yang/Wang Xiaoli from a hat-trick of World Superseries Finals trophies.

The teams that could possibly upset the Chinese would be the Danish duo of Christinna Pedersen and Kamilla Rytter-Juhl (above) and the two Japanese pairs of Shizuka Matsuo/Mami Naito and Ayaka Takahashi/Misaki Matsutomo. The Danes have had their moments – they won a Superseries in Malaysia and caused a huge upset at the Olympics, beating second seeds Tian/Zhao in their group match, but they have also been inconsistent, losing a few early-round matches to lower-ranked opposition. However, their attacking ability and right-left combination will create problems and afford them the possibility of impacting the Superseries Finals. Shizuka Matsuo and Mami Naito were steady through the year, and though they do not have any titles to show, they can be pleased with their performance. They were frequent quarter-finalists and semi-finalists, but constantly struggled against the Chinese. Their Japanese compatriots, Ayaka Takahasi/Misaki Matsutomo, were even more impressive. They handed top seeds and Olympic champions Tian Qing/Zhao Yunlei a rare defeat in the Denmark Open semi-finals, and won three tournaments – US Open GPG, Canada Open GP and Indonesia Open GPG.

The Korean pair Eom Hye Won/Jang Ye Na had a solid late season, winning the Macau Open GPG and reaching the semi-finals at the China Open, Malaysia Open and final of the Indonesia Open GPG. They lost a close match to world No. 2 pair Bao Yixin/Zhong Qianxin 20-22 21-15 25-23 in the second round of the Swiss Open, and that performance might give them confidence against Chinese rivals in the future.

Hong Kong’s Poon Lok Yan/Tse Ying Suet (above) were lucky to qualify after the Japanese team of Miyuki Maeda/Satoko Suetsuna declined to participate. They were surprise winners at the Japan Open Superseries, but had some average performances during the rest of the year. Somewhat similar was the Thai duo of Kunchala Voravichitchaikul/Duanganong Aroonkesorn, whose best performance came on home soil – a semi-final placing at the Thailand Open GPG.