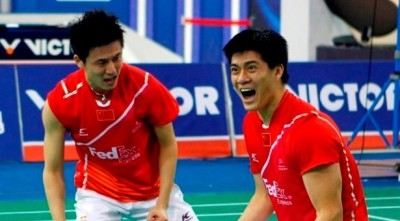 The contemporary legends, who have won four World Championships, were ninth on the list of potential qualifiers but made it into the vital top eight after The former world No. 1 unit have played just seven events this year, but critically the Chinese duo (featured image) won the only title that had eluded them – the Olympic gold. Having achieved the biggest prize of their careers, they seemed to cool off at the Denmark Open, falling in the first round. At their home China Open, they lost the quarter-finals to new Korean combination Lee Yong Dae/Ko Sung Hyun, but they again cruised into top form in Hong Kong the next week. A brilliant semi-final victory over young compatriots Liu Xiaolong/Qiu Zihan, confirmed the world champions were back to their best and it was almost inevitable they would beat ace Malaysian pair Koo Kien Keat/Tan Boon Heong (above) in straight games in the final. If they retain their form, they should walk away with their first-ever World Superseries Finals title.

Their principal opponents will be Koo and Tan as well as Mathias Boe/Carsten Mogensen of Denmark (right). The Malaysians have crafted a remarkable turnaround in their career. The first half of the year was a nightmare as they lost in the early rounds of many events, leading to a discussion with their national association about a possible split in the combination. However, they asked for more time and, to its credit, the association decided to stick with them as a pair. That faith was repaid as Koo and Tan came up with a strong performance at the Olympics, losing the bronze medal playoff to Lee Yong Dae and Chung Jae Sung of Korea.

Since then, the Koo and Tan have been consistent, reaching the Denmark Open and Hong Kong Open finals. Though they failed to win a Superseries in 2012, they must be pleased at the way they have come back from the brink. Boe and Mogensen’s stellar moment came at the London Olympics, where they overturned all predictions by upsetting the favourites Lee Yong Dae/Chung Jae Sung in the semi-finals. The Koreans had a formidable 12-4 head-to-head record going into the match, but the Danes triumphed when it mattered – their reward an Olympic silver medal.

The European champions went on to claim the China Open in November, and are in line for their third straight World Superseries Finals title.

The team that can trouble the top three would be world No. 6 Korean pair Kim Ki Jung and Kim Sa Rang (above) who were impressive through the year, winning one Superseries (Japan Open), a Grand Prix Gold (Indonesia Open), and the Badminton Asia Championships.

Hiroyuki Endo/Kenichi Hayakawa of Japan too were consistent, with their best result coming at the US Open GPG, which they won without losing a game in four matches. They also reached the final of the Asian Championships, and can be a handful to the bigger names.

Thailand’s young guns, Bodin Issara and Maneepong Jongjit (right), had good campaigns at the India Open and Vietnam Open GPG, which they won; the Olympics (quarter-finals); and the French Open Superseries (final). However, they were not consistent, falling in the first round of five tournaments. Current form does not favour them, but they are capable of upsetting higher seeds.

The other two outfits in the draw, Hong Wei and Shen Ye (China, No. 8) and Hoon Thien How/Tan Wei Wee Kiong (Malaysia, No. 15), may be less favoured to make an impact at these Superseries Finals. Yet, with the competitiveness in Men’s Doubles, it’s likely the week could throw up some surprises – and even outright shocks.