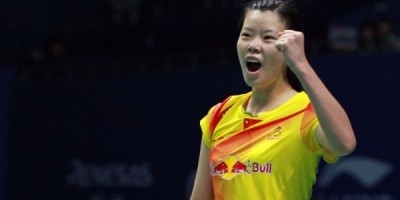 Despite the absence of its defending Women’s Singles champion, Wang Yihan, the CR Land BWF World Superseries Finals will not be devoid of quality.

Though injury has thwarted the world No. 1 and Chinese shuttler’s quest for a second straight year-end success, eight of the best have confirmed their participation and it is difficult to predict the winner. The favourite must be Olympic gold medallist, Li Xuerui (featured image), who has enjoyed an astonishing season – winning seven major individual titles. Amazingly, Li has won 51 of 56 matches this year – triumphing more than 90 per cent of the time!

In a relatively short career, she has won most of the major titles – the Olympics, the Asian Championships and the All England, and she will be keen to add the World Superseries Finals to that list. Among those likely to deny her the title are Germany’s Juliane Schenk and India’s Saina Nehwal (together, above). Both have beaten Li this year – Schenk at the Denmark Open and Nehwal in the Indonesia Open final. Schenk has been one of the most consistent players on the tour, reaching the finals or semi-finals of nine major tournaments. Schenk also has a good record against the top Chinese players and will hope to add another trophy to her first Superseries title won in Singapore. Asked about her consistency versus the Chinese, Schenk said: “It’s simply about enjoying (playing). The previous tournaments have been good for me and I try to go my way. I’ve proved in the past that I can beat them (Chinese). To make it consistent is great. There’s no special secret to it. The Superseries Finals this year is a goal.”

Saina Nehwal had a slow start to the year, but she had a dream fortnight in June, sweeping the Thailand Open and Indonesia Open Superseries. At the Indonesia Open she had brilliant victories over third seed Wang Shixian in the quarters, Sung Ji Hyun (Korea, semi-finals), and Li Xuerui in the final. Following a successful campaign at the Olympics, where she won a bronze medal, the 22-year-old had another remarkable two weeks in Europe, winning the Denmark Open Superseries Premier and finishing runner-up in the French Open. Boasting victories over all the top Chinese, Nehwal stands a good chance of finishing 2012 on a high.

The second Chinese in the fray is world No. 5 Wang Shixian, who has not had a good season by her high standards. Although she had a great start to the year – winning the Korea Open and reaching the final of the Swiss – her confidence seemed to desert her after she lost a thrilling quarter-final to Nehwal at the Indonesia Open. She frequently lost in early rounds to lower-ranked players, such as Xuan Deng (China, No. 107), Minatsu Mitani (Japan, No. 13), Eriko Hirose (Japan, No. 14), and Porntip Buranaprasertsuk (Thailand, No. 12). However, Wang has won major titles and she is capable of coming back in strong fashion; the World Superseries Finals could be the ideal stage.

Tine Baun (above) is in the final leg of a great career. She is definitely not at her best, and her 2012 season reflects that: the only title she won was the European Championships. In all the other tournaments, she failed to get past the quarter-finals. However, it would be foolhardy of the others to underestimate this great Dane, as she is certainly capable of springing a few surprises.

The other three contenders are Sung Ji Hyun (Korea, No. 8), Eriko Hirose (Japan, No. 14) and Ratchanok Intanon (Thailand, No. 9). Sung Ji Hyun (top left) was consistent through the year, with a couple of big upsets (China’s Wang Xin and Jiang Yanjiao), but she has no title to show. Hirose, the 27-year-old, continued to fight despite the march of much-younger opponents. She was narrowly beaten to the Japan Open title by teenager Tai Tzu Ying (Chinese Taipei), and made the semi-finals of the French Open after upsetting second seed Wang Shixian.

Ratchanok Intanon (above) had her moments in the year but found it hard to go all the way. Nevertheless, she had some significant wins and the 17-year-old has progressed well. Whether the Thai prodigy can challenge for honours at the World Superseries Finals is another question altogether.