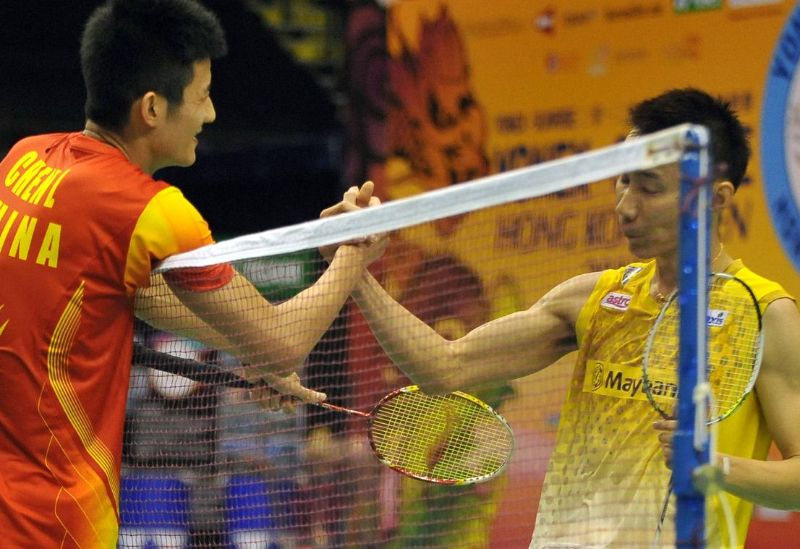 Defending champion Lin Dan will be the only big name missing from Men’s Singles in the year-ending CR Land BWF World Superseries Finals that get underway in Shenzhen on 12 December. Lin, the World and Olympic champion from China, has played in only three Superseries events in 2012 – the Korea Open, Malaysia Open and All England – and is placed a lowly No. 29 in the World Superseries standings.

Barring big upsets, the Men’s Singles should be a fight between No. 1 Lee Chong Wei (Malaysia) and No. 2 Chen Long (China). The two (together, featured image) have met 12 times in their career, and Lee holds a slim advantage with a 7-5 record. He has had an outstanding season so far –reaching the final of all nine open tournaments he has taken part in, winning five. It will be interesting to see if he can make a tenth straight final.

“It has been hectic year, especially with my wedding and all,” Lee was quoted as saying by The Star newspaper. “I only had two days of solid training after my marriage for the Hong Kong Open but I still made it to the final. Physically, I can still press on but, mentally, I am quite drained. Anyway, I will go all out in my final tournament for this season at the World Superseries Finals and try to keep my record clean.”

However, the Men’s Singles event will not be only about Lee Chong Wei and Chen Long. The feisty Du Pengyu (top left) of China will hope to go all the way to a title after failing thrice in finals this year – at the Asian Championships, Indonesia Open and Denmark Open. Pengyu can be a difficult player to beat for the best players if he gets into rhythm, as he demonstrated in the exciting Denmark Open final, where Lee just got past him.

There is also Daren Liew, who surprised everybody by winning the French Open Superseries; a strong performance in Shenzhen will help this Malaysian prove that the Superseries victory was no fluke. Kenichi Tago (left) had a wretched mid-season after beginning the year promisingly. He reached the final of the Malaysia Open and semi-finals at the All England but, half-way through the year, he lost in the first or second rounds of five straight tournaments. However, he seemed to recover his confidence at the French Open, where he made the semi-finals. The Japanese player admitted in Hong Kong that there is still a gulf between him and the top players. Whether he can reduce this chasm in Shenzhen is left to be seen.

The other three in the draw have not been consistent. Hong Kong’s Hu Yun enjoyed a good run of form in the middle of 2012, reaching the semi-finals of the Indonesia Open and Japan Open, and final of the China Masters, but the latter half of the year has seen him lose in the early rounds. Thailand veteran Boonsak Ponsana (top right) also struggled, but a win at the Singapore Open Superseries and the runner-up place in Japan helped him salvage The lucky qualifier in the Men’s Singles was Denmark’s Hans-Kristian Vittinghus (right) who benefitted from the withdrawal of Japan’s Sho Sasaki. The Dane has dropped to a world ranking of 24 from his career-best 14, and has had an average year, with his best performances coming at the German Open and Swiss Open (quarter-final losses to Lin Dan and Chen Long respectively). Vittinghus will back himself to spring some surprises at the Superseries Finals.