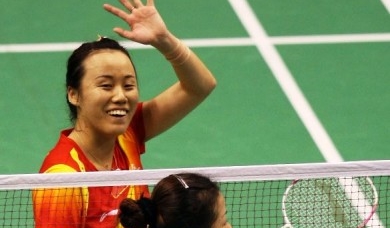 The Chinese were assured of three gold medals before the start of play as they were all-China affairs. The main questions were whether No. 2 Chen Long could upstage No. 1 Lee Chong Wei (right) of Malaysia in the Men’s Singles final, and whether the Olympic champions Cai Yun/Fu Haifeng would be upset by Koo Kien Keat/Tan Boon Heong in Men’s Doubles. As it turned out, both these matches went China’s way in straight games. The other three finals went to the Olympic champions, with Zhao Yunlei claiming another double: Women’s Doubles with Tian Qing and Mixed Doubles with Zhang Nan. Li Xuerui (at right, with Wang) took the The Men’s Singles final was breath-taking in parts, though not quite living up to expectations. Lee was dominant early on, with his tremendous bursts of speed putting Chen under pressure, but as the match wore on, his rustiness became apparent. Unlike previous encounters between them, it was Chen who started to control the net. The world No. 2 recovered from 10-13 to draw level, and then pulled away, with Lee struggling to keep within reach. Unusually for Lee, his precision was off and he gifted points at crucial moments that helped Chen’s cause.

In the second game, Chen led throughout. Lee attempted to fight his way into the match, but Chen’s swiftness and defence was exceptional. At 8-6 came the rally of the match: Lee played three hairpin net shots, but Chen retrieved each of them until he forced the error from the Malaysian. The 21-19 21-17 triumph gave Chen his second straight Superseries title after the China Open.

“No excuses,” said Lee. “Chen Long was more stable today and was relaxed after the Olympics. I didn’t want to play here at first, as I wanted to rest after the wedding. I wasn’t able to play my normal match. I tried my best and didn’t have any target today, so I’m okay with the result.”

His opponent was complimentary in victory. “I have a lot to learn from players like Lin Dan and Lee Chong Wei,” said Chen Long. “My biggest target is the World Championships. This (Hong Kong Open) was more to gain experience.”

The Women’s Singles final saw No. 2 Li Xuerui take the title over No. 1 Wang Yihan who retired at 21-12 11-3 as she was concerned about her right knee. Wang had been playing with it heavily-strapped throughout the tournament, and said she didn’t want to worsen it.

“I pushed myself a lot and did my best,” said Wang “but I didn’t want to injure myself, so I decided to retire.”

The first match of the day was a riveting contest between Olympic Women’s Doubles champions Tian Qing/Zhao Yunlei (above) and the pair that was disqualified from the Olympics, Yu Yang/Wang Xiaoli. The match was the longest of the five finals as the duos traded shot for shot, and it was eventually the composure of the Olympic champions that made the difference. They took the title 22-20 14-21 21-17.

The Mixed Doubles final was expected to be another marathon, pitting Olympic gold medallists, Zhang Nan/Zhao Yunlei, against the Olympic silver medallists, Xu Chen/Ma Jin. Zhang/Zhao won in London but Xu/Ma were on a hot streak, having won four Superseries in a row. The difference between the two sides was Zhao Yunlei. Despite having played her Women’s Doubles final earlier, the Olympic champion dominated the net against her opposite number Ma Jin. So steady was she at the forecourt that even the usually unflappable Ma Jin succumbed and the Olympic champions won in straight games, 21-17 21-17. “I’m used to playing two events, so it was not a problem,” Zhao said, of winning two titles. “Even though we didn’t train much after the Olympics, I wasn’t particularly tired today.”

The final match of the tournament was Cai Yun/Fu Haifeng against Koo Kien Keat/Tan Boon Heong. The Malaysians started off promisingly, with a 10-4 lead, but the Chinese worked their way back through consistent big hitting. The Malaysians were brilliant and erratic by turns, thus unable to sustain the momentum after a hard-won point. They enjoyed a good spell late in the second game when they were down 10-17 – they lifted the shuttle and invited Fu and Cai to breach their defence, and they did return those thunderbolts to frustrate the Chinese briefly.

However, the deficit was too large to overcome, and they will rue a few missed chances. Upon converting match point, an excited Cai threw his racket in the air and stripped his shirt off. The 21-16 21-17 victory secured, the world and Olympic champions had helped China to a comprehensive rout of the opposition.