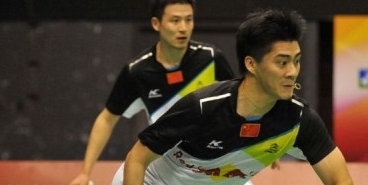 It will be up to Malaysia to prevent a Chinese whitewash at tomorrow’s finals of the Yonex Sunrise Hong Kong Open 2012.

The Dragon gobbled up all opposition in the semi-finals today, ensuring at least three title victories. Men’s Singles No. 1 Lee Chong Wei finds himself in the familiar role of having to salvage something for the rest of the world as he takes on No. 3 Chen Long in the final, while in Men’s Doubles, Lee’s Malaysian compatriots Koo Kien Keat/Tan Boon Heong will be up against the Olympic champions from China, Cai Yun and Fu Haifeng.

Among the few to provide stiff resistance to the Chinese today were Mixed Doubles pair Joachim Fischer Nielsen/Christinna Pedersen of Denmark, in a replay of their Olympic semi-final against world No. 2 Zhang Nan/Zhao Yunlei. The match followed the same pattern, with the Danes taking the opening set, China equalising, and finally winning the match by a narrow margin, 13-21 21-15 23-21. A crestfallen Pedersen could only compliment the Chinese for playing better than them on the crucial points. “We were happy to be in the semis today… it was close in the third, but we’d wanted more from here, we’d wanted to be in the final tomorrow. Overall, we’re satisfied. They won the Olympic gold medal; they’re playing well, and every time we play them, it’s close in the third. We know we’ve to be 100 per cent ready. If we are not, we won’t have a chance. We were close today. We were not in the Olympic shape, but we were trying and fighting, and it was so close to make it to the final.”

Zhang/Zhao take on Xu Chen (above)/Ma Jin in the final – a repeat of the Olympic final which the former won. But the Olympic silver medallists have been in tremendous form, and are on course for a fifth straight Superseries title. The Women’s Singles final too will feature the Olympic finalists, Li Xuerui and Wang Yihan (left). Li was a comfortable victor over team-mate Wang Shixian 21-12 21-13, while Wang Yihan managed to exact some revenge for last week’s loss against Juliane Schenk with a 21-8 19-21 21-15 result. After an easy first game win, the match became intense with the doughty Schenk stonewalling Wang’s steep attacking game. There were frequent gasps of astonishment from the audience as Schenk managed to retrieve seemingly impossible shuttles around the court. The German’s never-say-die spirit showed when, trailing 17-19, she pocketed the next four points to force a third game.

The early part of the third too was just as close, with both players locked in a gripping duel. At the midway mark, however, errors began creeping into Schenk’s game. The German was not able to keep the shuttle deep enough consistently to prevent the tall Chinese’s missiles zeroing in on their mark. An accurate down-the-line smash gave Wang match point which she converted when Schenk sent a clear well long.

Despite the loss, Schenk was able to take some positives from her campaign.

“It was simply amazing that I was able to fight back after losing the first game,” she said.

“To focus again and win a thrilling second game was good. I tried my best to give a good match (to the crowd). No regrets. I’ve been playing six weeks in a row, so there’s nothing to complain about my result here.”

Lee Chong Wei was tested by the resurgent Kenichi Tago (below) but stepped up a gear when he needed to. The young Japanese, who is rediscovering his form after a wretched early season, moved beautifully and hit hard, with Lee just about staying level thanks to his sudden bursts of speed and rock-solid defence. At 19-19 the Malaysian again stepped up a level, catching Tago with a flick, and then with his astounding pace to take the first game. The second was Lee’s all the way (21-19 21-15). Tago admitted that he had some way to go before he could hope to catch up with the fleet-footed Malaysian. “I put everything into the first game,” said Tago.

Lee’s opponent for the final, Chen Long, was troubled by No. 30 Tommy Sugiarto in the first game, but the Indonesian’s length went awry in the second. Through the early part he was crafty, mixing his game well and preventing Chen from firing in his booming smashes. The Chinese world No. 3 did just about enough to take the first game, and with Sugiarto constantly erring in length in the second, he had no problem in closing it out 21-18 21-10.

The most memorable match of the day was the all-Chinese Men’s Doubles encounter between four-time World Champions Cai Yun/Fu Haifeng and their younger compatriots Liu Xiaolong/Qiu Zihan. Until late in the match it was impossible to tell which way it was going, for both gave as good as they got. The younger pair gave their seniors lots of trouble, but it was the greater experience of Cai and Fu that eventually helped them overcome the youngsters, 18-21 21-17 21-16. The Malaysian pair Koo Kien Keat/Tan Boon Heong stand in their way of yet another Superseries title.