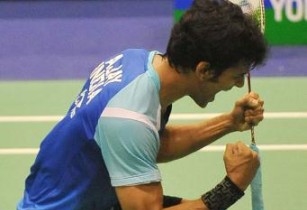 “I was nervous initially but, after Taufik won the first game, I calmed down and played better.”

Parupalli’s match against Jorgensen of Denmark was the day’s standout result. Jorgensen saved four game points in the opening game which Parupalli took 24-22. The Dane then held off a fightback from the Indian in the second, as Parupalli levelled an 18-20 deficit, but could not prevent Jorgensen from clinching it at 22-20. The pattern reversed in the decider, with Jorgensen fighting back from 15-19 to holding match point at 20-19, but Parupalli held firm to grab the next three points.

In Women’s Singles, the highest-profile loser was seventh seed Jiang Yanjiao of China, beaten by experienced It was not a happy campaign for Hong Kong players in their home Superseries. World No. 14 Hu Yun was the only winner out of seven singles competitors. Apart from Hu, the others – including Ng Ka Long, Wong Wing Ki and Chan Yan Kit in Men’s Singles, and Yip Pui Yin and Chan Tsz Ka in Women’s Singles – were first-round casualties. The scene was not any better in doubles. Five pairs in Women’s Doubles, including Poon Lok Yan and Tse Ying Suet (right), and one in Mixed Doubles were eliminated. Hu held off a late charge from world No. 6 Du Pengyu of China, 21-17 22-20 and will take on Abdul Latif of Malaysia next. Wong Wing Ki, who said he was looking forward to playing in the grand Hong Kong Coliseum for the second time, was beaten in three games by Indonesia’s Tommy Sugiarto. “This is my sixth Hong Kong Open,” Wong said before the match. “Earlier, the hall was much smaller. I like it here because of the atmosphere, and my friends will be cheering for me.”

Meanwhile, both the top two seeds – Lee Chong Wei (Malaysia) and Chen Long (China) – progressed into the next round easily. In the Men’s Doubles, the prominent upset was that of fourth seeds Bodin Issara/Maneepong Jongjit, beaten 21-18 21-10 by Lee Sheng Mu/Tsai Chia Hsin of Chinese Taipei.

Double Olympic gold medallist, Zhao Yunlei of China, advanced to the second round in both Women’s and Mixed Doubles with her respective partners – Tian Qing and Zhang Nan (left, with Zhao).