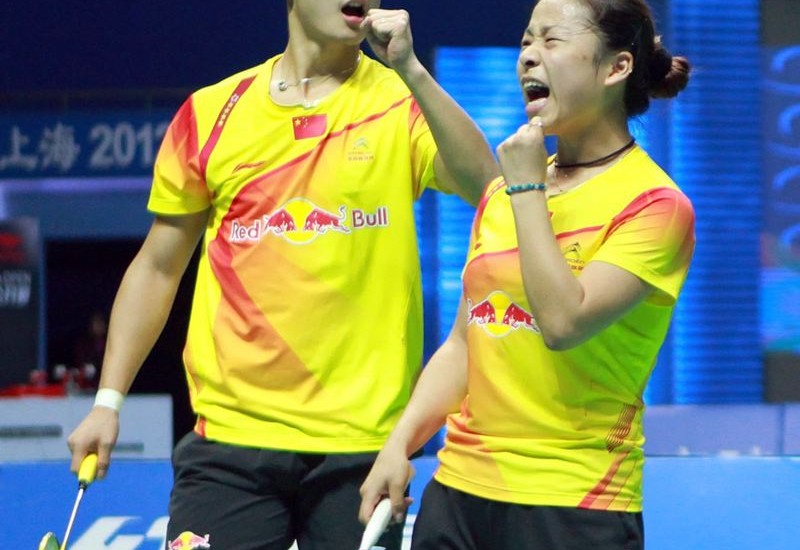 China won all four finals in which they figured on the last day of the Li-Ning China Open today, with Chen Long and Li Xuerui winning the singles titles. Olympic champion Li Xuerui (pictured with Intanon, right) took just 31 minutes to demolish world No. 10 Ratchanok Intanon’s challenge 21-12 21-9. After six-all in the first game, it was Li all the way. The Men’s Singles final saw two former world junior champions locking horns: Chen Long and Wang Zhengming. Top seed Chen Long took his time getting into rhythm. Finding himself down 11-14 after a wild shot, Chen suddenly tightened his play and increased his pace, maintaining the lead from then on to take the first game.

Wang fought back well in the second, showing glimpses of his delightful skill with some deceptive flicks and net shots. He Yu Yang’s win in Women’s Doubles final means she is now tied with Men’s Singles world No. 1 Lee Chong Wei as winner of a record 27 Superseries titles. It was the perfect comeback for the player who had retired after the Olympics, but then changed her mind. The final against Japan’s Miyuki Maeda and Satoko Suetsuna was evenly contested for much of the first game. The Japanese were at their defensive best, engaging the Chinese in long rallies, and managing to extract the occasional error as Yu Yang and Wang Xiaoli (left) looked rusty at times. Points were level until 19, but Wang Xiaoli won game point with a sharp return, and then wrapped up the game by smashing down the middle.

The Chinese continued with the momentum into the second game, but midway through, it became apparent that Suetsuna was struggling after a fall at the back court. Clutching her back in pain, she signalled to the umpire that she could not continue, and the Chinese were awarded the match 21-19 14-7 retired. In the Men’s Doubles, Olympic silver medallists Mathias Boe/Carsten Mogensen (right) of Denmark won their first Superseries title of the year with a surprisingly easy 21-15 21-14 verdict over Lee Yong Dae/Ko Sung Hyun of Korea. The Koreans were unable to wrest the attack from the Danes for any substantial period and the top seeds must have been particularly relieved to secure a title after losing three of the last four tournaments in the first round.