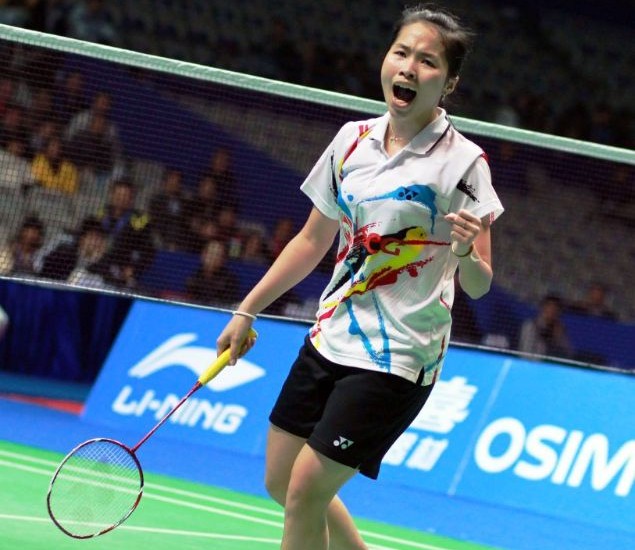 Intanon, a three-time world junior champion, will take on second seed Li Xuerui of China in tomorrow’s final. The home nation has representatives in four of the five title battles, with the only exception being Men’s Doubles, where Lee Yong Dae/Ko Sung Hyun of Korea will attempt their second straight Superseries victory when they take on top seeds Mathias Boe/Carsten Mogensen of Denmark (right). It will be a good opportunity for Lee Yong Dae to claim some revenge, as he and former partner Chung Jae Sung were upset in the Olympic semi-finals by Boe and Mogensen.

China’s Ma Jin (left) has a great chance of a sixth Superseries victory in succession. After taking silver in Mixed Doubles at the London Olympics, the 24-year-old has won five Superseries titles in a row – two in Women’s Doubles with Tang Jinhua (Denmark Open and French Open) and three in Mixed Doubles with Xu Chen (China Masters, Denmark Open and French Open). She and Xu Chen will face off against Chang Peng Soon/Goh Liu Ying (Malaysia) in the Mixed Doubles final. The Malaysians upset All England champions Tontowi Ahmad/Lilyana Natsir 21-19 21-14 in the semi-finals.

Of the five events, only the Men’s Singles will feature an all-China match. Former world junior champion Wang Zhengming made the final without hitting a shuttle as he was given a walkover by senior compatriot Chen Jin. Top seed Chen Long (bottom, left) advanced to the final after an easy 21-6 21-7 rout of Malaysian Chong Wei Feng.

A lot of the attention will be on the Women’s Doubles pair of Yu Yang and Wang Xiaoli tomorrow. Three months have elapsed since they were disqualified from the Olympics, following which Yu Yang announced her retirement. They now have a chance of a fantastic comeback when they take on Miyuki Maeda/Satoko Suetsuna of Japan. In the semi-finals, the Chinese were untroubled by the Thai pair of Narissapat Lam/Saralee Thoungthongkam 21-9 21-4. Sixth seeds Maeda and Suetsuna however were tested by eighth seeds Eom Hye Won/Jang Ye Na. The Japanese had an opportunity to close the match in straight games as they recovered from deficits of 12-17 and 15-18 to lead at 19-18, but the Koreans took the next three points to force the third game. Maeda and Suetsuna established an early lead in the decider and never let their foot off the pedal. The 21-17 19-21 21-13 result gives them a shot of a Superseries title.

In the Women’s Singles semi-finals, Intanon, who had beaten Schenk at the Olympics, repeated her feat against the in-form German. Schenk won a close first game 21-18, but Intanon established her dominance over the German after seven-all in the second. She surged ahead with five straight points and never looked back as she wrapped it up 21-10.

The third game was close until midway but, from 13-all, Intanon won the next eight points to just one from Schenk. The 17-year-old Thai has beaten Li once in four matches.